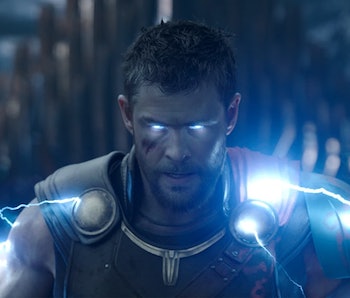 Thor: Love and Thunder will begin filming in January 2021. Chris Hemsworth recently confirmed the production start date and revealed that writer-director Taika Waititi was hard at work on the film's script. While Hemsworth didn’t drop too many spoilery details, he did hint that fans should expect “something different” regarding Thor. We know Jane Foster will transform into Mighty Thor and it’s possible that this plot development will lead Hemsworth's character down a divergent path.

In an interview with Swisse Vitamins & Supply Company (via Twitter), Hemsworth provided an update on Thor: Love and Thunder. What stood out were his comments about the different versions of Thor that he’s played in the past, with the actor indicating that the fourth installment will continue in that vein.

“[I’m] very excited to try and do something different. The last three films, we certainly pushed the envelope and created different versions of the character, and now people expect some dramatic changes. We’ve got our work cut out for us in that sense.”

Hemsworth’s comments imply the Asgardian hero will undergo another major change. At the end of Avengers: Endgame, Thor passed on his mantle as ruler of Asgard to Valkyrie, entrusting her to lead the people as she had successfully done for five years. Thor then joined the Guardians of the Galaxy on whatever adventure they were off to next. But last summer, Guardians 3 director James Gunn refuted persistent rumors that the further adventures of Star-Lord and Groot would be called Asgardians of the Galaxy.

We know Jane will become Mighty Thor at some point, but Natalie Portman recently revealed the character's undergoing cancer treatments. With the loss of his home, his father, and even Loki — well, in one timeline — protecting those closest to him will likely be more important than ever for the God of Thunder. After all, the title of the upcoming sequel does have "love" in it.

Thor could play more of a supporting role in Love and Thunder. The Asgardian hero has had his fair share of adventures and seems inclined to lay low and let others handle the responsibilities for a while. That’s not to say that he’ll be completely sidelined from the story, but it’s possible that he’ll be more focused on figuring out the next step in his journey. He was really struggling during Endgame and it seems more pertinent than ever for Thor to step down and look inward in what may be his final solo film.

In the comics, Thor carried on being a superhero after Jane wielded Mjolnir. However, he dubbed himself Odinson and wielded Jarnbjorn, the battle axe he used prior to carrying Mjolnir, for a while instead. The same thing could happen in Love and Thunder. It doesn't seem likely he'll take up the mantle of King of Asgard anytime soon.

Thor has arguably seen the most growth of the original five Avengers. Should he step aside for Valkyrie and Jane — be it to go off with the Guardians of the Galaxy or otherwise — it would certainly push the envelope just like Ragnarok did. Whatever version of Thor shows up in Love and Thunder, fans will be happy to have him.