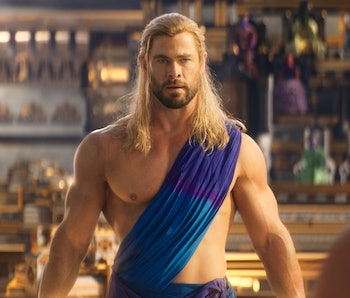 Marvel movies are for everybody. That’s their entire appeal. They’re movies that the entire family can enjoy. Thor: Love and Thunder may be getting mixed reactions from critics, but it definitely nailed one part of its approach: knowing its audience beyond the mass demographics.

Thor: Love and Thunder may be the most fan-focused film in Marvel Cinematic Universe history. Not only does it pay homage to the comics fans, but it emphasizes a thoroughly modern yet still core tenet of fandom: shipping.

The biggest change in Thor’s new chapter is the return of Dr. Jane Foster, who hides a big secret from those she loves. She’s actually suffering from cancer, but uses the power of Mjolnir to regain her strength and become the Mighty Thor. Unfortunately, this has the unwanted effect of rendering her chemotherapy ineffective.

This is ripped almost whole-cloth from the Mighty Thor comics, which followed Jane as she battled cancer while dealing with her dual identity as a superhero. What does it mean to be human in a strange predicament like that? It’s a heartbreaking and tragic plotline that is especially effective in a story that emphasizes love like Thor: Love and Thunder. But there’s an additional benefit to these themes, one that’s usually sidelined.

Taika Waititi explained to Entertainment Weekly in early July that the “Love” in Thor: Love and Thunder was chosen mainly to alienate fans.

“I was thinking, what would freak the fans out — and not in a good way?" he said. "You associate Thor [with being a] big hero. The last thing a Thor fan really wants to see is the word 'love.' They're like, ugh, kissing! So I was like, we'll lean into that. We'll make them love love, and make the fans excited for a romance.”

But this is overlooking a huge fan community invested in the shipping, or fictional romance, of the Marvel Cinematic Universe. These are the fans who supported the WandaVision ship enough that it got its own spinoff. Others write fanfiction where two unlikely Marvel characters fall in love. Plenty of others cheered when Steve went back in time to dance with Peggy (or when he interacted with Bucky.)

It seems like this is the first Marvel movie that’s especially focused on this section of fans, from the romantic dialogue about love and loss to the beautiful sequences that seem made for Tumblr gifs. It may have been chosen out of spite, but it’s actually targeting Marvel fans that are usually overlooked by such an action-focused franchise that’s often rather light on the romance.

What can Marvel learn from this? While the mixed reception to Thor: Love and Thunder basically guarantees it won’t be a long-term strategy for the MCU, it’s possible we will see more nods to this side of the fandom in the future. There’s more to the Marvel fandom than what you imagine. Marvel is for everyone. That includes the kids. That includes the fangirls. And yes, that includes the fanfiction authors.

More like this
Entertainment
8.10.2022 10:30 AM
Marvel is torturing VFX artists, but the solution is obvious
By Eric Francisco
Entertainment
8.8.2022 4:52 PM
Giancarlo Esposito’s X-Men quotes could reveal a new MCU trend
By Dais Johnston
Entertainment
7.30.2022 12:00 PM
How the most iconic Ms. Marvel scene confirmed the show’s “enormity”
By Mónica Marie Zorrilla
Related Tags
Share: