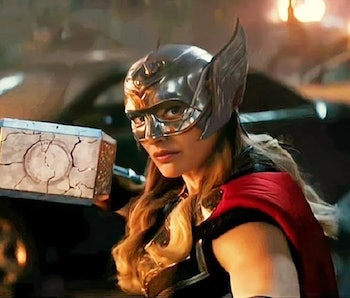 Part of the appeal of the Marvel Cinematic Universe is how it explores some of the biggest themes in storytelling: Duty, sacrifice, morality, family, twerking. But its exploration of those themes has always been a little straightforward. Tony Stark sacrifices himself for the greater good, Groot considers the Guardians his family... those storylines are effective, but they’re cut and dry without a lot of broader implications to consider.

Thor: Love and Thunder, however, turned perhaps the biggest question facing everyone on Earth into a subplot: What happens when we leave this mortal coil? The answer, at least according to the MCU, is more complicated than you think. Essentially, Marvel has upended a lot of theology.

The first post-credits scene, the one most MCU fans remember from Thor: Love and Thunder, features Ted Lasso star Brett Goldstein as Hercules, son of Russell Crowe’s jovial Zeus. But the second scene was more somber, showing Jane Foster arriving in Valhalla after dying of cancer.

It’s good to know Jane will enjoy the ultimate in Asgardian comfort for eternity, but this scene actually has far more significant implications. Thanks to Moon Knight, we already knew the MCU exists in a polytheistic world, where there are countless gods for different creatures and different societies. But when it comes to the afterlife specifically, it looks like the MCU has adopted a non-reductive pluralist attitude.

Non-reductive pluralism is the belief that there are many “roads to heaven,” even if the destination isn’t called heaven. Basically, if you’re a good person, you’ll end up in The Good Place, or at least a good place, wherever that might be. After all, Valhalla isn’t the only afterlife we’ve seen in the MCU; Moon Knight showed us both an Egyptian heaven, and an Egyptian hell.

Thanks to those two MCU projects, we know the Norse/Asgardian version of the afterlife is very real, and the ancient Egyptian version is real too. This presumably isn’t common knowledge among average people, but it has major implications for them.

If multiple belief systems are correct, then the MCU is championing relativism. “Salvation” and admittance to a pleasant afterlife isn’t really a matter of picking the right belief system, but of being a good person. It’s a heavy subject, but the MCU is making an important philosophical argument. And on an Earth frequently beset by alien invasions and villainous schemes, it’s good to know that divine bureaucracy is flexible.

Hopefully Marvel realizes the gravity of the religious implications they’re making, and embraces them as an example of tolerance rather than weaponizing them as a source of future conflicts. If different gods can exist in the MCU, then surely different afterlives can too. Maybe we’ll even see where Tony, Steve, and Natasha would up.

Thor: Love and Thunder is now streaming on Disney+.