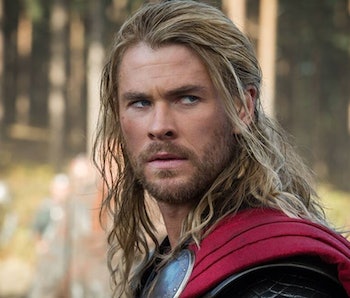 One of the few things that we definitely do know about next year’s Thor: Love and Thunder is that its cast is, to put it simply, massive.

Indeed, the film will feature a number of returning characters from the Thor franchise, including Chris Hemsworth’s titular God of Thunder, Natalie Portman’s Jane Foster, Taika Waititi’s Korg, and Tessa Thompson’s Valkyrie, as well as several unexpected cameos from actors like Russell Crowe and Melissa McCarthy.

Thankfully, there’s reason to believe it could.

The Theory — One of the most memorable interactions in Avengers: Endgame came early on in the film’s runtime, as Hemsworth’s Thor silently sized up Brie Larson’s Captain Marvel. On its own, the moment acted as a fun way to bring the two characters together, and it immediately established a dynamic between Carol and Thor, two of the most powerful characters in the MCU.

But ever since their brief interaction in Endgame, Marvel fans have been wanting more of Thor and Captain Marvel together on-screen. Rumors began circulating online earlier this year that Captain Marvel will appear in Thor: Love and Thunder.

But will Carol Danvers actually show up in the Thor sequel?

A New MCU Duo — It has, admittedly, been a while since word first started circulating that Thor: Love and Thunder would feature a surprise cameo appearance from Captain Marvel. But that doesn’t mean the powerful MCU hero won’t show up.

In addition to their brief but delightful interaction in Avengers: Endgame, the third-to-last episode of What If…? Season 1 centers around a conflict that breaks out in an alternate reality between Captain Marvel and a more-reckless-than-usual Thor. The episode (titled “What If... Thor Were an Only Child?”) saw the two Avengers coming to blows over the God of Thunder’s increasingly destructive party on Earth, and cemented their place as two of the most powerful characters in the MCU.

The What If…? episode also did plenty to establish Captain Marvel as the kind of powerful and responsible protector who could, ostensibly, take over as the new leader of the Avengers moving forward. That’s something every Marvel fan might want to start preparing themselves for, because — with Jeremy Renner’s Hawkeye seemingly on his way out right now — Hemsworth’s Thor may be the only original Avenger left in the MCU after this year. However, as Avengers: Endgame proved, he’s not a character interested in leading.

With Tony Stark and Captain America both out of the picture, the Avengers are in need of a new leader. Fortunately, Captain Marvel seems like a prime candidate to fill that position, and recent titles like What If…?, Avengers: Endgame, and Shang-Chi and the Legend of the Ten Rings have all done much to establish her as the right person for that job. A cameo in Thor: Love and Thunder could just serve as another step on her journey toward steering the Avengers.

The Inverse Analysis — Whether or not Captain Marvel will appear in Thor: Love and Thunder, it’s certainly intriguing to consider what her presence would mean for both heroes.

After all, not only would an appearance from Carol in the Thor sequel continue to cement her and the God of Thunder as a legitimately great MCU duo, but it’d further build towards her possible appointment, in a film like Avengers 5, as the new leader of Earth’s Mightiest Heroes.