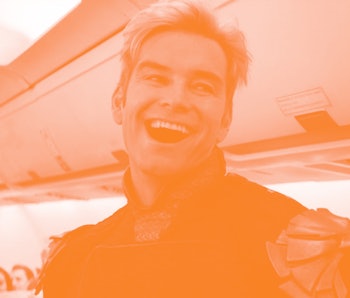 The Boys made a blood-soaked splash when the first season of Amazon’s comic book adaptation released in 2019. But even though production on new episodes had already begun before Season 1 even aired, we still know next to nothing about The Boys Season 2. No release date, no trailer, nothing.

However, at The Boys panel during the Chicago Comic & Entertainment Expo, one cast member may have dropped a huge spoiler about how Season 2 could feature one of the most gruesome plotlines from the R-rated comic the show is based on.

Warning! Possibly huge spoilers for The Boys Season 2 ahead.

Speaking at the C2E2 panel, Antony Starr (Homelander on The Boys) revealed that one under-utilized character could play a major role in Season 2.

That might not sound like a big deal, especially since the ninja-inspired member of the corrupt superhero organization at the heart of The Boys didn’t play much of a role in Season 1. But if you’ve read the comics — or looked up spoilers online — you know that Dark Noir plays a key role in one of the biggest reveals in the comics. And it has everything to do with Homelander.

In the comic, it turns out Black Noir is actually a clone of Homelander. This is revealed after Homelander is blackmailed with a series of images showing him committing crimes he has no memory of (because Black Noir actually did them).

Eventually, Homelander is driven to insanity and killed the U.S. President. Then, Noir shows up, reveals he’s a clone, and kills Homelander. After that, Billy Butcher shows up and murders an early weakened Noir, who we also learn is the one that killed Butcher’s wife.

Some of this definitely won’t happen in The Boys Season 2. After all, Butcher’s wife is still alive, as we learned in the Season 1 finale. But other plot details could easily turn up in new episodes.

Black Noir’s true identity in the Amazon adaptation remains a mystery. Revealing that he’s a Homelander clone would be a killer plot twist that most fans won’t see coming. (Whoops, sorry!)

Of course, it’s possible The Boys could go in another direction entirely. Black Noir could be an entirely original character under that mask. Or he could be a clone of someone else — maybe even a clone of Butcher!

We’ll just have to wait and find out.

When is The Boys Season 2 release date?

We don’t know for sure, but we do have a few ideas. Considering that Season 1 released on July 26, 2019, it seems likely Amazon could target that same launch window for The Boys Season 2. July 26 was a Friday last year, so July 17, 24, or 31 all seem like likely options for Season 2.

Then again, considering that production on Season 2 began before Season 1 even aired, it’s possible we could get more The Boys even sooner. June? May? April? Anything seems possible for Amazon’s gory and gritty superhero satire.

Until then, rewatch this teaser trailer for The Boys Season 2.