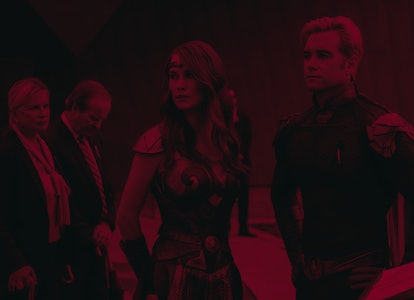 The Boys Season 2 has been in production since before Season 1 premiered on Amazon in July 2019, but in the age of Coronavirus, no TV show seems safe from delays and cancellations. Thankfully, that's not the case with The Boys, which not only wrapped production before this pandemic took hold but might even get an accelerated released date as a result.

The Boys showrunner Eric Kripke tweeted about the series over the weekend, encouraging people to check out the first season before teasing the show's return for Season 2:

What does it all mean? Let's take a closer look.

What is the release date for The Boys Season 2?

We still don't know. Production began before Season 1 premiered on July 26, 2019. So we've assumed for a while that Season 2 would stick to that schedule and release on July 26, 2020. However, with everyone stuck at home (including Kripke), it's possible that post-production could be sped up.

After all, it's not like the editing team has anything better to do. And Amazon would be far from the first studio to rush a release for bored fans stuck at home due to Coronavirus. Could it release a month early in June? Sooner? Anything seems possible.

What else do we know about The Boys Season 2?

A decent amount, actually! Season 1 ended with the reveal that Butcher's wife was still alive and raising Homelander's kid. A brief teaser hinted that Season 2 would explore the ramifications of this cliffhanger and reveal how it happened.

The Boys Season 2 will also introduce several new characters from the comics. The biggest addition could be Stormfront, a white supremacist who was a member of the Hitler Youth with superpowers modeled after DC's Shazam. Amazon's adaptation gives the character one new twist, turning this male supervillain into a woman played by Aya Cash (You're the Worst).

Patton Oswalt is joining The Boys Season 2 as well in an unrevealed role. However, he may be playing The Legend, a character in the comics who knows the corrupt superheroes' secrets. Other new cast members include Goran Visnjic as Alistair Adana, "the charismatic and shadowy leader of a mysterious church," and Claudia Doumit as Victoria Neumann, "a young wunderkind congresswoman," according to a Deadline report.

Finally, The Boys Season 2 could explore one of the comic book's darkest plotlines all about Homelander and Black Noir. We won't spoiler it for you, but you can read all about this potentially gruesome twist right here.