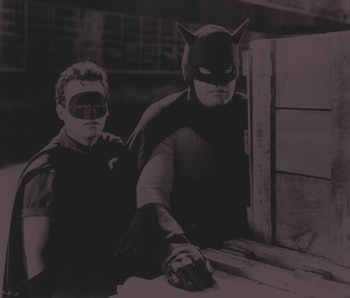 Whenever there's a Batman movie playing in theaters, you're bound to see kids imitating the Caped Crusader in the lobby. But in Batman's own origin story, young Bruce Wayne watched Zorro before the fateful event that transformed him into the Dark Knight.

In a new interview, The Batman star John Turturro invoked the legendary Zorro in discussing his role in the upcoming DC superhero movie, hinting at another way the movie could pay tribute to the earliest incarnations of Bruce Wayne.

In an interview with Inquirer about the new HBO miniseries The Plot Against America, Turturro took a detour and talked about The Batman. A new DC superhero film starring Robert Pattinson, the film is scheduled for June 21, 2021, but production is temporarily frozen due to the novel coronavirus pandemic.

“I’m playing the bad guy,” Turturro confirmed to Inquirer about his role as Carmine Falcone, a recurring character in Batman stories and one of Gotham City's top gangsters. (Onscreen, the role was last played by Tom Wilkinson in the 2005 film Batman Begins, and by John Doman in the Fox series Gotham.)

“I loved Batman growing up," said Turturro, "but I’m really a Zorro fan. So there’s no Batman without Zorro."

Turturro's right: There is no Batman without Zorro. A pulp character created by Johnston McCulley in 1919, Zorro is one of the earliest superheroes in pop culture and had a direct influence on Batman's creators Bill Finger and Bob Kane. A masked crusader who rides a horse and carries a rapier, Zorro is the masked identity of the Spanish nobleman and talented sword-fighter, Don Diego de la Vega.

Like Bruce Wayne, Don Diego de la Vega spends his days as an affluent playboy, but by night, he's in a never-ending crusade against injustice in Spanish California. Zorro first appeared in pulp novels before becoming more widespread in film serials, radio, and later Disney television and Hollywood movies. The most recent big-screen adaptations was the 1998 film The Mask of Zorro, and its 2005 sequel The Legend of Zorro, both starring Antonio Banderas.

In Bob Kane's 1993 obituary for the New York Times, it was reported that Kane was inspired by a number of pulp characters, including the Shadow and Zorro. (It must be said that Bill Finger was way more involved in the making of Batman than Kane, however.) The influence of Zorro in Batman runs so deep that it's canon to the DC Universe that the movie the Waynes watched before their murders was the 1940 swashbuckler film, The Mark of Zorro.

"When I was 5 years old, I thought I was Zorro with a sword," recalled Turturro. "Then, when Batman came on TV, it was a big thrill. I read some of the comics. My sons always read DC comics. So I played with those for years. I like Matt Reeves, the director."

Turturro has never acted in a comic book movie before The Batman, though he did have a recurring role in Michael Bay's Transformers series. “When I was a kid, I loved swashbucklers,” he said. “Errol Flynn, Robin Hood. I love things with dueling. Also horses and mustache. And his alter ego is wimpy. It’s like Superman, but with a horse. It’s got a little more Spanish influence."

Turturro's admiration for Zorro will likely have little influence over The Batman. But it is reassuring to see Reeves' approach to making his Batman more noir-like is manifesting in interesting, if also unintentional, ways. With Turturro as one of Batman's most frequent enemies (who isn't a clown or a penguin), it will be fun to see how Turturro taps into his childhood influence playing one of the thorns in a masked vigilante's side.