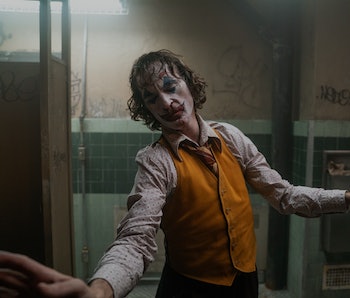 Anyone who has paid attention the past year will know that director Todd Phillips insists his DC film Joker isn’t like any other comic book movie. Yet the movie’s big, violent ending does something many big comic book movies tend to do these days — set up the beginning of another character.

Those who are familiar with the mythology of Gotham City will recognize it, but those who might not, well, here’s your handy, spoiler-filled guide.

Huge spoilers for the ending of Joker ahead.

But Arthur’s had something of a bad week, because he’s no longer Arthur. He’s now the Joker, and on live television, Joker admits to committing the heinous subway murders that have captured Gotham City residents’ imaginations. After an impassioned speech about the hypocrisies of society, Arthur/Joker shoots Murray Franklin, causing the city — already on high alert due to Arthur’s clown hysteria — to violently riot on the streets.

The clown chaos on the streets finds its way to the Wayne family. Billionaire Thomas Wayne with his wife Martha and son Bruce leave a movie theater playing the 1981 film Zorro, The Gay Blade. That’s when a rioter behind a clown mask corners the Waynes in the alley and shoots them cold, saying they “get what you deserve.” He shoots Thomas first, then Martha, whose pearl necklace comes undone in the air. A young, traumatized Bruce just stands there, speechless.

Yes, the ending of Joker features Bruce Wayne’s tragic origin into Batman. It’s the famous story of the Waynes gunned down in front of their son, spurring everlasting trauma that inspires Bruce into a lifelong crusade against crime. It was first introduced in Detective Comics #33 (published in 1939), and fans have been hooked on that origin ever since.

All the details are intact, too, for the most part. The part with the pearl necklace is a homage to Frank Miller and Klaus Janson, who artfully emphasized the pearls in a series of panels in the immortal series The Dark Knight Returns.

While most depictions of Batman’s origin show Bruce and his family watching the 1940 movie The Mark of Zorro — largely used to explain Bruce’s decision to take up vigilantism — Phillips’ Joker attempts period accuracy with the 1981 comedy Zorro, The Gay Blade, which was directed by Peter Medak and starred George Hamilton in a more slapstick version of the iconic Spanish swashbuckler.

It’s unlikely Phillips is actually setting up his own Batman movie.

First, a new Batman is already happening with director Matt Reeves and actor Robert Pattinson in the role. How that movie will properly fit into the DCEU is unclear, but for now, trust that Batman will soldier on without Ben Affleck.

Second, Phillips has made it clear that Joker isn’t meant to begin a new franchise. He told IGN, “We have no plan for a sequel,” and that “we made this movie, I pitched it to Warner Bros. as one movie. It exists in its own world. That’s it.”

Furthermore, an interview with The Wrap showed Phillips has something of a distaste towards modern superhero movies. He described Joker as “a real movie … under the guise of a comic book film,” which sounds rather condescending towards a diverse medium responsible for shaping most of popular culture.

He was quoted to have told Phoenix in courting him for the project:

“We didn’t make the movie to push buttons … I literally described to Joaquin at one point in those three months as like, ‘Look at this as a way to sneak a real movie in the studio system under the guise of a comic book film.’ It wasn’t, ‘We want to glorify this behavior.’ It was literally like, ‘Let’s make a real movie with a real budget and we’ll call it f–ing Joker.’ That’s what it was.”

Ultimately, the depiction of Bruce’s origin in Joker is cute — and really, what storyteller allowed the rare chance to play in this universe wouldn’t try their own version? — but there’s nothing more behind it other than to nod towards the universe that allowed Joaquin Phoenix and Todd Phillips a chance to play around with Warner Bros.’ money in the first place.

Joker is in theaters now.