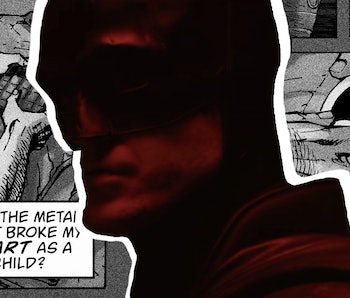 Immediately after director Matt Reeves unveiled Robert Pattinson's costume for the 2021 movie The Batman on social media, people quickly pointed out how Batman's new chest emblem may be molded out of a handgun. While that is certainly a twisted detail considering it's the same type of weapon that killed his parents, there's actually a riveting story behind it, and it's one that was written by Kevin Smith in the pages of Detective Comics.

On Thursday, Matt Reeves released test footage of Robert Pattinson's Batman costume, which the actor will wear in the 2021 movie The Batman. It was a situation reminiscent of when director Todd Phillips revealed Joaquin Phoenix's Joker back in 2018. To combat unfavorable leaks from paparazzi, Warner Bros. is slowly adopting a policy in which directors will release test footage as teasers that generate buzz.

Coated in deep shades of red lighting, evocative of the cover to Frank Miller and David Mazzucchellis' Batman: Year One, Robert Pattinson looks geared up in a mix of welded armor (similar to the Batman: Arkham video games) and raised shoulder and cowl pieces (similar to artist Lee Bermejo's interpretation). But zoom in and enhance on Pattinson's chest piece and you'll notice that the iconic bat symbol is shaped by two pieces of a handgun split in half — with a few modifications.

Here it is up close, with some exposure adjusting by yours truly:

One story, "Manufacture For Use," was written by Kevin Smith and illustrated by Jim Lee. In it, Batman uses his civilian disguise "Matches Malone" to visit a pawn shop selling pricey relics from some of Gotham City's most notorious crimes. One of them is a semi-automatic Glock with a bandage wrapped on the handle. "You remember the Wayne murders?" the seller asks Bruce. Bruce buys the gun and returns to the Batcave, where he personally reforges the metal into a piece of armor for his costume.

We can sit here all day and discuss the meaning of Batman's actions in Kevin Smith's comic. There are compelling arguments that Bruce Wayne is unhealthily obsessed with his childhood trauma, that Batman is a little too over-sentimental, and that he's is just being totally weird. But, as a story, it's kind of an awesome idea. It pays homage to revolutionary ideas introduced by some of Batman's best storytellers, like Frank Miller and Christopher Nolan who emphasized Batman's utility of fear as a tool in his endless crusade.

If Batman is afraid of bats, he's probably also afraid of guns, because it was a gun wielded by a criminal that took his parents away. And nothing screams "Batman" more than using his fear against his enemies.