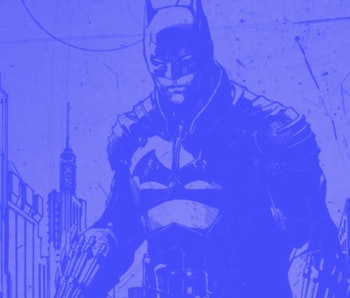 After a long drought, DC FanDome provided some much-needed content for anxious DC Universe fans. Ranging from a new Snyder cut trailer to the revival of Milestone comics, the 24-hour online event was full of awesome reveals. The closing panel focused on Matt Reeves's hotly anticipated upcoming film The Batman, which sees Robert Pattinson donning the cape and cowl. Fans raved about the trailer, but more news happened quietly overnight.

In a press release acquired by /Film, Warner Bros. revealed Irish actor Barry Keoghan has been cast in The Batman as Officer Stanley Merkel. Those with an indepth knowledge of Batman canon would recognize him as Commissioner Gordon's former partner, who has appeared in a handful of issues. His biggest role, unfortunately for him, was as a "red shirt" in Batman: Dark Victory #6, where he was introduced and then quickly killed off by the Hangman, a serial killer who left hangman-style puzzles at the scene of the crime.

Hangman was the alias of Sofia Falcone, the mob boss Carmine Falcone's daughter. Carmine will be portrayed by Jon Turturro in The Batman, so an appearance by his daughter is likely. Keoghan's Merkel may meet the same grisly end as the one in Dark Victory and make the crime all the more personal for Batman and Jim Gordon.

If Sofia appears in The Batman, it wouldn't be her first live-action appearance. She also appeared in the prequel show Gotham, but not as her villainous alter ego, just as a crime boss. Should she appear in the film as Hangman, she'll join a crowded Rogue's Gallery including Catwoman, the Riddler, and the Penguin. With her father by her side, that adds up to quite the threat for the young vigilante, who apparently will be shown in his second year of adopting the Batman persona.

Of course, there are other possibilities as well. Another villain could off poor Officer Stanley as a way to get to the commissioner. Perhaps he's the victim we see The Riddler do away with in the trailer. If he's fighting corrupted cops, the few cops in the cast would be the first place to look. He might not become a victim at all. Considering Keoghan is only 27 years old, we could see him in a flashback of the Commissioner's past as a mere rookie cop.

This new villain would be interesting to add to the already impressive lineup. While Carmine Falcone is merely a mob boss, pairing him with a supervillain daughter would take the entire story up to the Batman-level stakes other films have explored.

Adopting this plot point would deal a crushing blow to Commissioner Gordon as well. The world of The Batman needs no more tragedy in it, but it would be interesting to see how a victim tied to one of his closest allies would affect the young Dark Knight.