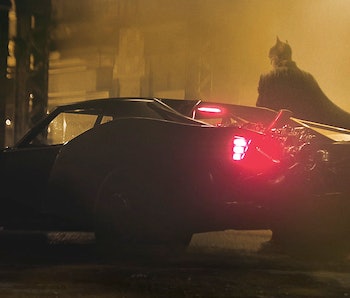 Batman lives life a quarter-mile at a time. In a blockbuster tweet shared by director Matt Reeves, the filmmaker unveils Robert Pattinson's Batmobile, and it's a Batmobile unlike anything fans have seen before.

On Wednesday, Matt Reeves shared a collection of pictures of the new Batmobile on Twitter, set to debut in Reeves' 2021 movie The Batman. The pictures include Robert Pattinson, standing next to the Batmobile, in full costume, in a dusty Gotham City warehouse.

Keeping in line with Pattinson's DIY armored Batsuit, the new Batmobile looks like a heavily modified vintage Dodge Charger, with an expensive-looking super engine in the back. The rear wheels also look modified, with the car's silhouette made to look like raised wings similar to classic Batmobiles.

You can already hear your friends typing "Bat and the Furious" jokes on Twitter. But the Batmobile does reveal a few things about Robert Pattinson's Batman fans will meet for the first time in The Batman. First, it shows that billionaire Bruce Wayne isn't just throwing his money around starting with a super-advanced arsenal from the start, but is instead starting on a budget by building upon existing tools.

Second, Bruce Wayne is utilizing what looks like a vintage Dodge Charger, a timeless symbol of the once-powerful American auto industry. This speaks to the uniquely American noir roots of Batman and the tone Matt Reeves is going for with The Batman.

The car also grounds the film in a more familiar reality than recent Batmobiles. While this Batmobile is still a head-turner, you could still expect to see something like it at your local car show. Meanwhile, if someone rolled up in Ben Affleck's and Christian Bale's Batmobiles, people would run away screaming.

You can see the pictures of Robert Pattinson's Batmobile below.

More revealing is what the new Batmobile doesn't have: Guns. While it's hard to see the Batmobile in its entirety, Pattinson's Batmobile seems to rid Batman of the crazier weaponry that Affleck's and Bale's Batmobiles came packing. Pattinson's doesn't appear to have any bazookas or machine guns, which suggest that the DCEU's new Batman won't zip around Gotham guns blazing as he did in Batman v Superman or Batman: Arkham Knight.

In short: This is a cool car. It's different than what Batman's fans have grown used to seeing, which is the tired cross-breeding of a Hummer and a Lamborghini. This time, the Batman is all muscle. American muscle. Dom Toretto might be sweating gears right now.