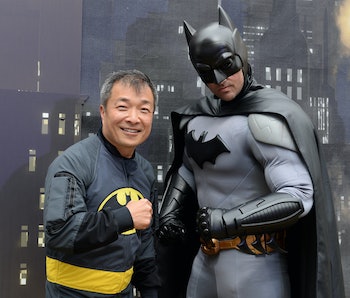 In what is maybe the first official use of the term "DC Extended Universe" by a DC executive, Chief Creative Officer and DC comics current publisher Jim Lee hyped a panel audience on the immediate future of the DC Films slate, including The Batman and its possible ties into the DC cinematic franchise.

At the Chicago Comic and Entertainment Expo on Saturday, Jim Lee hosted one of his signature draw-and-Q&A panels where the comic book icon sketched drawings while taking questions from the audience. When one audience member who identified themselves as "Aaron from St. Paul, Minnesota" asked Lee (now the sole publisher at DC Comics following the exit of Dan DiDio in late February) for his stance on the fabled "Snyder Cut" of the 2017 film Justice League, Lee chatted about the future of DC Films.

“We’ve been working on the slate," he said. "We have an amazing Batman movie, Suicide Squad is just killer, and Black Adam next year. These are all just next year with Wonder Woman ’84, which has tremendous momentum from the first movie that was amazing. So there’s a lot of great positive things happening as that universe continues to move on."

Lee added that 2021 will be a big year for DC Films, as it "will be the first time ever that we’ll have three theatrical releases in one year. And Walter Hamada’s in charge of DC Films. He’s a great partner. Loves DC. Super creative. Great relationships with filmmakers. So we’re very positive and hopeful for the future of the DC Extended Universe.”

It's important to note Jim Lee openly talked about the "DC Extended Universe," the previously-unofficial term for the DC cinematic franchise. The term originated as a joke by a writer for Entertainment Weekly, but snowballed to become part of the fandom's vocabulary as a way to describe DC's answer to Marvel's Cinematic Universe. Vulture's Abraham Riesman confirmed in a (now deleted) tweet in 2017 that no one at Warner Bros. ever used the term "DC Extended Universe."

It's equally big that Lee made mention of The Batman in the same breath as the DCEU. Until this point, the upcoming 2021 DC movie occupied a hazy place in the DCEU continuity. After Ben Affleck's exit from the role last year, it was unknown what was to become of Matt Reeves' Batman project. The film was later retooled and recast with Robert Pattinson playing a younger iteration of the Dark Knight. How Pattinson's version will connect to the rest of the "DCEU" (if at all) remains to be seen.

For now though, when audiences sit in their seats to watch Wonder Woman 1984 or The Suicide Squad and The Batman next year, they can be assured that they are watching the DC Extended Universe.