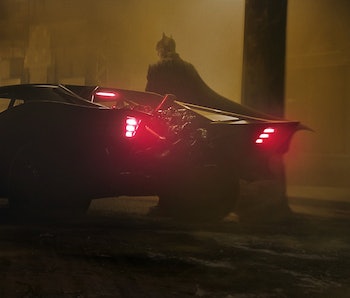 Jeffrey Wright has been reading comics. The star of HBO's Westworld and Matt Reeves' upcoming 2021 DC superhero movie The Batman recently shared some insights about makes the new Batman movie so different from those that came before it. It comes down to one thing: The car.

What Happened? — On a Thursday episode of The Jess Cagle Show on SiriusXM, Wright discussed his role in The Batman. Though he didn't reveal much, the actor described the film as "the next evolution" of the Batman mythos "since 1939 when these stories began."

"We're working together to create a mood, to create an idea, a setting, a tone," he said. "This is the next evolution of Gotham. I am working off the stage Matt is providing and also working off what [star] Robert [Pattinson] is doing. We are trying to create something together that is our own, but is also Batman."

"Grounded in Americana" — Later in the interview, Wright honed in on a particular element he says sets The Batman apart from past cinematic Caped Crusaders. "I read the script for the Batmobile and I was like, 'Yeah, that's it,'" Wright said. "[Bruce Wayne] created the most badass muscle car you could imagine, but it's grounded in Gotham. It's grounded in Americana."

The new Batmobile isn't a secret. Months ago, the director tweeted photos of Robert Pattinson's Batmobile, which revealed a heavily modified muscle car, akin to classic cars like the Chevy Camaro or Dodge Charger. It's a huge departure from previous Batmobiles in movies, which lately have looked like giant tanks crossed with a Lamborghini.

Wright's comments also gesture toward something bigger. Muscle cars are iconic in American culture, but they're also pretty affordable — far more affordable than a Lamborghini with machine guns, anyway. And aside from the modifications, this Batmobile wouldn't look out of place zipping down Route 66.

Batman is driving in what appears to be a Camaro that Bruce Wayne modified in his garage. That's a refreshingly grounded take on the character. Bruce Wayne is a billionaire and could buy a hundred cars, sure, but that he's being resourceful with just one hints that Batman is still unsure about this whole "superhero" business. We know the film will tell the story of a younger, less experienced Batman inspired by comics like Frank Miller's Batman: Year One.

The Inverse Analysis — Despite the pandemic, the rules for movie promotion are still in place, so it's unlikely the cast and crew of The Batman will spill much of anything from now until October 5, 2021, which is when the movie is expected to open in theaters. With production delayed, it will be a while before a trailer is released to generate even more buzz and speculation. Until then, little comments like "grounded in Americana" will reveal as much as they can about the next incarnation of the superhero icon.

The Batman will be released in theaters on October 5, 20201.