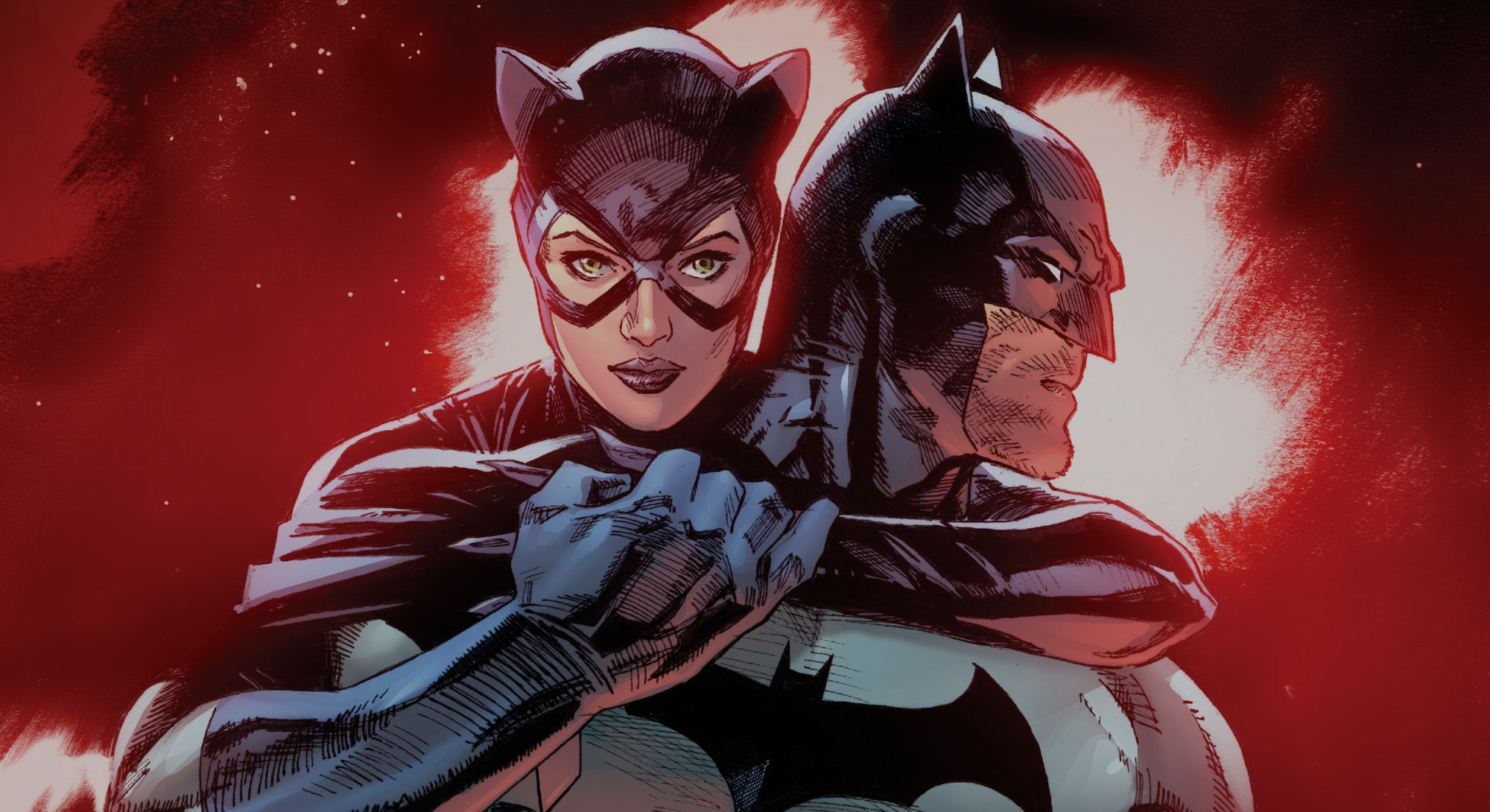 With two spin-offs for HBO Max already planned — centered on James Gordon and the Penguin — and rumor of more to follow, Reeves’ vision will undoubtedly redefine the mythos of Gotham City for the next decade.

As shown in last year’s phenomenal teaser trailer, Batman (Robert Pattinson) won’t just be dealing with the threat of the Penguin (Colin Farrell) and the Riddler (Paul Dano). He’ll also meet his match in the form of the female vigilante Catwoman (Zoe Kravitz), who is said to have her own unique methods of justice. Fur will fly, folks.

Like the other central characters in the film, Catwoman’s arc is said to run the course of several movies in this new franchise, with the character’s look and personality slowly moving closer to that of her comic book counterpart. Will the same be said of her romance with Batman? With the two “engaged” in the comics, it doesn’t seem like there will be any less Catwoman in Batman’s immediate future, whatever the medium. Bat-Cat fans, rejoice!

Reeves and Kravitz have an opportunity to explore Catwoman with more depth than ever before by not relegating her to a one-film appearance. In fact, given the other HBO Max spin-off series in the works, we have the pur-fect (sorry!) idea of how to get the most out of Kravitz’s Catwoman.

Since her first appearance as the Cat, all the way back in Batman #1 (1940), Selina Kyle has been an icon. She’s played the role of femme fatale, burglar, villainess, anti-hero, and superhero. She is all of these things, wrapped together in a bow of intrigue, sexuality, and ambition.

Selina Kyle has the distinction of being one of the few, perhaps only, Batman characters to gain a following as a beloved character in any iteration. The trifecta of Julie Newmar, Lee Meriwether, and Eartha Kitt in the ‘60s Batman series and movie; Michelle Pfiefer’s stitched together hellcat in Batman Returns (1992); Adrienne Barbeau’s socialite iteration in Batman: The Animated Series; Anne Hathaway’s noir-inspired revolutionary in The Dark Knight Rises (2012); and Carmen Bicondova’s street-wise portrayal on Gotham all delivered memorable, and authentic portrayals of Catwoman. Kravitz, who previously voiced the character in The Lego Batman Movie (2017), will undoubtedly borrow from the past while also finding new material to sink her claws into.

While many of Batman’s adversaries are reflections of his own psyche, Catwoman is the closest to being a mirror image. As Bruce Wayne tells Selina in Tim Burton’s Batman Returns, “We’re the same. Split right down the center.”

This idea has been explored numerous times in comics over the years, most recently in Tom King’s Batman run, which redefined the couple’s relationship and brought them right up to the edge of marriage.

During his run of Batman, and in the current Batman/Catwoman series, King has taken a deep dive into Selina’s psyche and forced her to question who she is. Can she be truly good? Can she subscribe to Batman’s methods without losing herself? And if she’s willing to make Bruce Wayne happy, can he still be the Batman that Gotham needs?

The takeaway is that Catwoman is driven by individualism, even as part of a relationship. She can’t be Batman’s sidekick or his Robin. She’s someone with her own agency and a mission that doesn’t always fit in the parameters of Batman’s worldview. Enter, Matt Reeves.

The notion of exploring what that mission is and where Catwoman stands in terms of the fall of Gotham’s criminal families and the rise of freakish villains is too exciting to pass up. An HBO Max series would be a fascinating place to allow Selina’s journey to continue in between the gaps of the new film series.

If each The Batman spin-off represents a different viewpoint of Gotham — from the cops to the criminals of the new era — Selina could walk right down the center, traversing the shades of gray and introducing us to the denizens who live there.

Batman: Year One and Batman: The Long Halloween have been cited as reference points for The Batman, which is presumably true for these spin-offs as well. Selina’s makeshift Catwoman get-up in The Batman is clearly reminiscent of Year One. As for The Long Halloween, there’s an interesting thread introduced in that series that could be worth tugging on in Reeves’ movie and any subsequent stories in the franchise.

In Jeph Loeb’s Batman: The Long Halloween, Catwoman: When in Rome, and Batman: Dark Victory, Selina has reason to suspect she may be the illegitimate child of Carmine Falcone. This revelation has been retconned several times. At one point, it was revealed Selina was actually the child of another crime boss, Rex Calabrese, who was pushed out by Falcone.

In the Batman Eternal weekly series, Selina eventually emerged as Gotham’s new crime boss, and while the new role was unfortunately short-lived, it was a compelling iteration of a character who has long had significant ties to the mob.

It has already been revealed that Falcone (John Turturro) will be featured in The Batman. In order to further distance this iteration of Gotham’s mob boss from Nolan’s in Batman Begins (2005), it’s possible Reeves’ will take the Loeb and Sale route and make Selina’s vendetta against the Falcone Family personal. I’m fascinated by the idea of Selina being a child who could have been born into one of the wealthiest families in Gotham but was discarded and forced to steal to survive.

Once again, this would create an interesting parallel to Batman’s own journey of being born into wealth and instead choosing to live in a cave. Robert Pattinson’s Bruce Wayne doesn’t seem to be taking the socialite route, which is interesting should the franchise explore the disparity between the haves and have-nots in Gotham.

Despite being one of DC’s most well-known characters, there’s still so much mystery surrounding Catwoman. And it would seem this mystery is one we’ll continue to see unravel like a ball of yarn in The Batman as Matt Reeves and Zoe Kravitz set the stage for revelations that will hopefully give us the new great Batman-Catwoman saga.