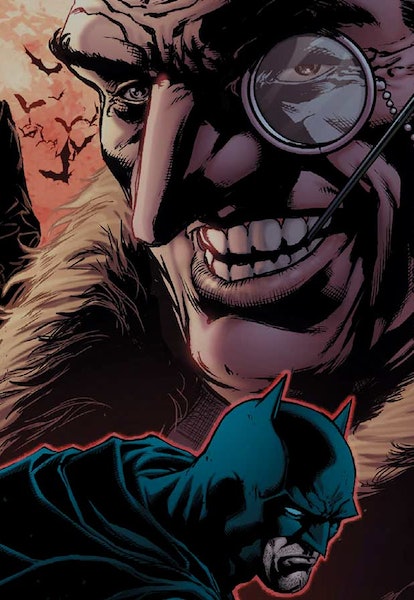 The Penguin may soar yet.

Matt Reeves’ The Batman won’t swoop into theaters until next year, but the film already has fans waiting with bated breath to see the latest iteration of the World’s Greatest Detective, this time portrayed by Robert Pattinson.

While the past twenty years have offered no shortage of Batman projects — from Christopher Nolan’s Dark Knight trilogy to Zack Snyder’s Batman v Superman alongside serialized TV shows like Gotham and Pennyworth — The Batman is set to be the first to expand the world of Gotham City through both film and television under one continuity. With an HBO Max series centered on James Gordon (Jeffrey Wright) already in the works, reports of a Penguin spin-off from Reeves and writer Lauren LeFranc, comes as a welcome surprise, especially given Colin Farrell’s unrecognizable appearance in last year’s teaser trailer.

It’s unknown yet whether Farrell will return for the series, though prospects look good given his already established relationship with HBO through True Detective. But what would a Penguin-centric spin-off series set in Reeves’ Gotham be about? Furthermore, how will this iteration differ from the memorable Penguin portrayals we’ve already seen with Burgess Meredith, Danny DeVito (my personal favorite), and Robin Lord Taylor?

The answer, as you might have guessed, may be found in the comics and the integral role Oswald Cobblepot serves in bridging the gap between Batman’s early years and his later, more chaotic ones.

The Penguin is one of Batman’s longest-running and most frequently appearing adversaries. His penchant for trick umbrellas and bird crimes made him something of a gag villain during Batman’s pre-Crisis years, and a scarce presence post-Crisis until Danny DeVito’s sublime and transformative performance in Tim Burton’s Batman Returns (1992).

DeVito and Burton’s portrayal redefined the Penguin, making him more than just a funny, little man with an infatuation with bird puns. They made him a genuine freak, discarded by one of Gotham’s oldest, wealthiest families to dwell in the sewer, surrounded by a criminal family of circus freaks. With a look partly inspired by Werner Krauss’ Dr. Caligari from the silent film, The Cabinet of Dr. Caligari (1920), and beak-like nose and sharp teeth, this iteration of the Penguin was a monster on the inside and outside.

This depiction, alongside with Batman: The Animated Series, which took a similar, though slightly more palatable, design choice, not only brought Penguin back to prominence in the comics but gave him a new role. As explored in Batman: The Long Halloween (1996), Jeph Loeb and Tim Sale’s sequel to Batman: Year One, Oswald Cobblepot is the bridge between the gangsters of Old Gotham City and freaks of the New Gotham: Scarecrow, Joker, Two-Face. Penguin facilitated that shift, becoming Gotham’s last surviving mobster, but one who is (mostly) comfortable working with the likes of Arkham’s most notorious inmates.

It’s this avenue that would be fascinating to explore in Reeve’s The Batman franchise and its Penguin spin-off series. Rumor has it that when we meet Cobblepot in the film, he’ll be early in his career, just as Batman is, and that the film series will see him move closer to his more iconic moniker with each installment. The same goes for Catwoman and the Riddler.

Reeves seems keenly interested in exploring the growth of Gotham City over time, rather than creating one-and-done villains who are fully formed in their first appearances and then tossed off by the film’s end. The Gotham that Reeves will usher us into is one on the precipice of great change. Mobsters like Carmine Falcone (John Turturro) still hold the city in their grips. Masked vigilantes and villains are just starting to emerge in the wake of Batman’s presence.

It should be noted that Cobblepot facilitating the shift from the mob to the freaks in Gotham was similarly explored in Fox’s Gotham over the course of five seasons. But that take on the character hinged (often wonderfully) on camp. Reeves and Farrell have a chance to take a more serious approach.

Perhaps a page could also be taken out of Telltale Games’ fantastic Batman: The Telltale Series, or animated series The Batman, in which Cobblepot is a foil to Bruce Wayne, the answer to the question of, What if Bruce Wayne had let his parents’ demise and wealth turn him to a life of corruption and opulence?

This concept of Bruce and Oswald being funhouse mirror reflections of one another is already baked into the comic book depictions. Instead of a Batcave, used in secret, to protect Gotham, Penguin builds an Iceberg Lounge, an aboveground party house for the rich and morally dubious, further sinking Gotham’s standing.

Alternatively, it’s also easy to imagine a Boardwalk Empire-inspired take on the Penguin through the HBO series, one that charts how an impoverished boy becomes a gangster and ruled a city. Whether as a means to explore wealth or poverty, there’s an opportunity to take a Shakespearean approach to the Penguin, while also playing a bit more with the freakishness of the character and Gotham as a whole.

There is a general sense that the Penguin, as used in the comics, is often uninteresting and rather one-note. But something I feel more writers could take advantage of — and what some already have — is that he’s just as much a representation of the identity of Gotham City and why we love the world of Batman, as Batman himself. He’s equal parts grounded and phantasmagoria.

If we’re lucky, Reeves and Farrell will follow in Burton and DeVito’s footsteps by redefining the Penguin for decades to come. Fans deserve a version of the villain who isn’t just material for filler issues, but one whose appearance we come to anticipate.