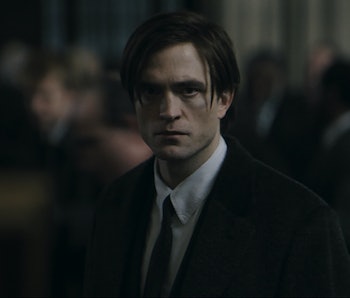 Batmans come and go, but the sound of Batman in the movies hasn’t changed in nearly 20 years. But all good things must come to an end. Prepare yourself for a fresh spin on the caped crusader’s theme, courtesy of Michael Giacchino’s overtly gothic score for the Matt Reeve-directed movie The Batman coming in 2022.

What Happened? — In a brief teaser video shared on Twitter on Batman Day (September 18, 2021), film composer Michael Giacchino shared a few seconds of his in-progress theme music for The Batman, the next Batman film slated for release in theaters on March 4, 2022.

“Happy #BatmanDay everyone!!” Giacchino writes in the post. “We have been hard at work and can’t wait to share what we’ve been up to!!”

The composer also tweeted the hashtag #DCFanDome, a hint that there will be more teasers at the virtual DC FanDome event which is taking place on October 16.

Gothic Roots — I am not a professional musician, so I can’t break down the theory behind the sound of Giacchino’s work on any fundamental level.

But as a listener, I can say that Giacchino’s music echoes the gothic sound that defines the collaboration between composer Danny Elfman and director Tim Burton, whose 1989 film Batman remains a cultural touchstone. Giacchino’s score may also remind Batman fans of the music for the Emmy-winning Batman: The Animated Series. Elfman contributed to the series as the theme-song composer.

Giacchino’s utilization of brass, strings, and heavy percussion is a detour from the dominant sound of Batman since 2005’s Batman Begins — the work of Hans Zimmer. The composer weaponized a hybrid mix of orchestral, electronic, and rock music for his and James Newton Howard’s scores for Christopher Nolan’s film trilogy, as well as Zack Snyder’s 2016 film Batman v Superman: Dawn of Justice when Zimmer also partnered with electronic musician Junkie XL.

In contrast to Zimmer and Howard’s music, Giacchino’s piece sounds more classical in spirit, evoking Batman’s roots in pulp fiction and comic books. The Batman is still a modern interpretation of the classic character, but Reeves seems intent on hewing to Batman’s origins as a detective rather than a superhero titan like DC characters Darkseid or Wonder Woman.

“The Hell You Supposed to Be?” — Giacchino’s work is in some ways surprising given what we’ve already seen of The Batman.

In 2020, the movie’s teaser trailer premiered at the inaugural DC FanDome. The footage snippet was set to a dark, brooding version of grunge rock band Nirvana’s “Something in the Way.” The sound evokes a modern, stripped-down aesthetic interpretation of Batman and indicates Matt Reeves’ very particular vision for the character that feels entirely fresh to even some lifelong fans.

It was an interesting choice. Outside of one Smashing Pumpkins song for the unpopular Batman & Robin in 1997, grunge rock has rarely been associated with Batman. Nor do the grunge genre’s genesis in the subcultures of the Pacific Northwest sync up with the rarefied origins of Bruce Wayne, whose generational wealth is rooted in a pre-colonial Northeast. (Gotham City is canonically in New Jersey.)

But Batman doesn’t need orchestral music, either. Pop artists from Prince to Method Man have done music for Batman movies. Recently, for DC’s Dark Knights comics in which Batman fights against evil versions of himself, Warner Music released a complete banger of a heavy metal album to accompany the writing.

In an interview with CinemaBlend published in 2020, Giacchino says that the editors of the trailer for The Batman picked the Nirvana song, finding that it matches perfectly with Giacchino’s own orchestral Batman theme.

“I think we just got lucky when it came around time to do the trailer,” Giacchino says.

“We got really lucky that [my main theme] just, it lied in perfectly against that song, you know? That was one of those things where they sent it to me, and they were like, ‘Should we fill it in more?’ And I’m just like, ‘I don't know. It sounds pretty great the way it is and the way that it's just sort of layered in.’”

“We gave them a few things to add into it, but not much at all. I feel like they did a really good job with that trailer. It was a great way of saying, ‘Here’s your next Batman.’”

The Inverse Analysis — Like other enduring pop-culture entities such as James Bond and Star Trek, Batman is chameleonic, capable of adapting to the shades of the time while remaining unmistakably, irrevocably Batman. So far, the sound of Michael Giacchino’s The Batman score sounds classic, but it’s hardly old-fashioned. Batman’s musical scores have seen experimentation in the form of grunge and Hans Zimmer’s creative hybrid music, yet there is always room for something timeless in the canon, too.

The Batman will be released in theaters on March 4, 2022.