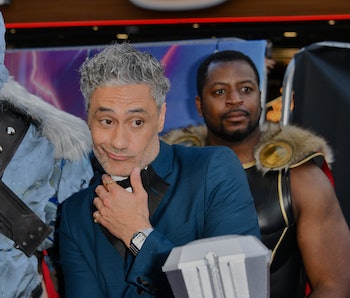 Release the Waititi Cut! Actually, in a recent interview with NME, the beloved director of Thor: Love and Thunder makes it very clear there’s no secret director’s cut of the new Marvel movie — despite reports that hours of extra footage and entire celebrity cameos were left on the cutting room floor.

In fact, Taika Waititi’s thoughts on directors’ cuts, in general, are somewhat hilarious and more than a little divisive.

Is he right? The short answer is: pretty much, yes. But there’s one movie that was utterly saved by its director’s cut, so much so that Waititi would probably agree.

The Snyder Cut both proves and disproves Taika Waititi

To be clear, Waititi is kidding around a little bit with this comment. But his primary complaint — that directors’ cuts are needlessly long — feels right on the money.

This mostly feels like a jab at Zack Snyder’s Justice League, a film that is certainly better than the 2017 version, but still, essentially, has the same problems. As much as the director’s cut of Justice League felt slightly better, much of that had to do with the lighting and colors and less with the actual length.

“It’s not good at four and a half hours.”

The Snyder Cut is kind of the best (and worst) example of the Taika anti-directors’ cut doctrine because it’s a director’s cut that fundamentally changed the plot of the “original” movie and is also too long. Further, The Snyder Cut is also a weird beast insofar as huge movies rarely switch directors for a theatrical release and then allow the original director to come back and do a restored version. In other words, you just can’t imagine Phil Lord and Chris Miller being allowed to go back and “restore” whatever their version of Solo was before Ron Howard was hired.

In other words, The Snyder Cut is almost not even a director’s cut, at least not the kind that Waititi is mocking. It’s closer to being a remix or re-imagining. Zack Snyder eliminated several elements from the Whedon version of Justice League (a race between Flash and Superman) and outright added other scenes, which actually change the meaning of the story (Bruce Wayne’s scary “Knightmare”). In this way, The Snyder Cut has a lot in common with the VHS re-release of Highlander 2 in 1995.

But, of course, The Snyder Cut is really, really long. And on that, Waititi has a point.

The Lord of the Rings director’s cuts are annoying

Could Waititi have been throwing shade at Peter Jackson? Because if so, now we’re onto something. Despite the near-perfection of Peter Jackson’s Lord of the Rings trilogy, the extended cuts are way too long. This is mostly because these versions ruin the tight pacing of the original versions.

That’s especially true of The Fellowship of the Ring, which has basically a different, and much slower opening sequence with its director’s cut. This is the problem Waititi is really talking about: movies that are basically done and end up simply longer when the director’s cut rolls around.

This idea, of simply adding extra scenes for a director’s cut, occurs in big ways (like Lord of the Rings) or small ways (like in The Wrath of Khan), but almost always, it’s simply unnecessary. Not terrible mind you, but as Waititi suggests, a bit annoying.

Blade Runner is the exception

Despite the fact that directors’ cuts tend to be both too long and annoying, there is one film that was absolutely saved by the existence of its director’s cut and that film is Blade Runner. Although it’s possible to take the position that it doesn’t matter which version you watch, the cinematic world is almost certainly better because of the existence of the director’s cut (or “Final Cut”) of Blade Runner.

Infamously, Ridley Scott’s cut of Blade Runner mostly removed things he didn’t like, rather than adding a bunch of additional scenes. What Blade Runner: The Final Cut did was allow for clarity of narrative and artistic consistency. Ridley Scott was able to remove a tacked-on “happy ending,” scrub the film of its over-bearing voice-overs, and restore one pivotal dream sequence (a unicorn!) to make one aspect of the climax explicable. His Final Cut isn’t super-long either.

In general, Waititi’s statement that “directors need to be controlled sometimes,” feels like a good rule of thumb. If you’re a huge DC fan and a fan of Zack Snyder in specific, then The Snyder Cut was a revelation. If you love spending more time in Middle-earth, then those extended editions of LOTR are awesome. But it’s hard to make an argument that the directors’ cuts truly change the mainstream perception of a film’s theatrical release. In a sense, a film has to have been kind of a failure at the box office in order to warrant a director’s cut at all. This is why the Lord of the Rings director’s editions are annoying, but a Blade Runner director’s cut makes sense. If nobody even saw it the first time, then suddenly, sure, let the director do whatever they want.

Unfortunately for any Taika super-fans, Thor 4 is already a box office smash, so any chance for a Waititi Cut has probably disappeared. But hey, there’s always Thor 5, right?

Thor: Love and Thunder is out in theaters now.

More like this
Entertainment
8.4.2022 12:30 PM
'X-Men: First Class' star knows how to fix his outrageous death in the MCU
By Ryan Britt
Culture
8.3.2022 11:30 AM
10 years ago, the worst Philip K. Dick movie ever, pulled off something amazing
By Ryan Britt
Entertainment
8.8.2022 3:17 PM
Westworld Season 4 is finally fixing the show’s original sin
By Ryan Britt
Related Tags
Share: