"In a week you’ll see that moment fleshed out." 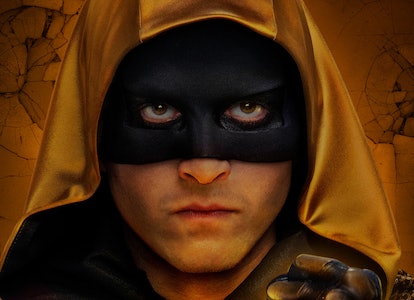 There are two new heroes in Stargirl, but one of them may threaten everything the heroes are trying to accomplish.

In the newest episode of Stargirl on DC Universe and The CW, troubled teenage mechanic Rick Tyler, played by Cameron Gellman, inherits his father Rex Tyler's enchanted hourglass that grants him extraordinary physical strength for one hour. After a difficult conversation and a heartbreaking discovery, Rick decides to join Courtney (Brec Bassinger), Yolanda (Yvette Monreal), and the new Dr. Mid-Nite, Beth (Anjelika Washington) to create the new Justice Society.

But will Hourman actually be a hero, or will he live long enough to become their next villain? Gellman tells Inverse that fans of Stargirl will see the DC superhero become both an asset and a liability throughout the rest of the season.

Spoilers for Stargirl Episode 05, "Hourman and Dr. Mid-Nite" ahead.

In the latest episode of Stargirl, the brooding Rick Tyler joins the new Justice Society after learning the truth about his parents' deaths from Beth, who has donned Dr. Mid-Nite's high-tech goggles. When Rick discovers his parents weren't killed in an accident, but murdered by the monstrous villain Solomon Grundy, Rick joins the team in order to exact revenge.

"His motivations are obviously understandable and we can empathize with them, but they’re not pure at all," Gellman tells Inverse. "[His vengeance] is not in line with the rest of the team. Courtney is trying to make Blue Valley safe for everybody, and Rick's just like, With or without you guys, I'm going after these people."

Adds Gellman, speaking from the perspective of Rick Tyler: "The reason my life sucks is now explained to me. If you guys help me, great. But if you get in my way, we're going to have a serious problem."

Gellman says Rick is both a powerful asset to the team, and their greatest liability. Without his emotions in check, his super strength can be a super problem. It remains to be seen just how long Hourman will cooperate with the JSA before tensions may boil.

"I think he represents a possible asset to the team as he does the Achilles' heel," Gellman says. "You’ll see him struggle to believe he’s wanted. You'll see him honor his emotions over what the team is asking for. You’re going to watch him flail as he tries to become the man his father raised him to be, and the man Courtney knows he can be."

Hourman, an obscure DC Comics superhero who first appeared in 1940, was a character creator Geoff Johns was really, really excited to introduce in Stargirl.

"We subscribe to the philosophy that we like the minor characters of the DC Universe," Johns told Inverse in an interview last month. "We like the character that have been on the bench too long that are ready to step up to the plate. There’s so much potential and untapped storytelling opportunities to venture into."

And of all the "minor" characters of the DC Universe, Geoff Johns was excited about Hourman most of all.

"He was this big, broody guy," recalls Johns. "There's obscure story lines in the comic books, and one of my favorites ever was a story with Hourman and Sandman. That's what made me fall in love with Hourman. He was so cool to watch and given center stage when they’re usually stuffed in the background."

Hourman's physicality is why he also chose to introduce Beth, a talkative outcast, as the new Dr. Mid-Nite in the same episode. "You have one who is incredibly physical, Hourman stumbles into his power and the addictive histories with that character is interesting. On the opposite side you have Dr. Mid-Nite, who is cerebral, intellectual. I always found that pairing interesting in the comics, but it was never explored. It was always on the surface."

Gellman credits Geoff Johns with helping him understand the gravity of what makes Hourman so special.

"Geoff did a gorgeous job making sure I understood that Hourman was Rick first," he says. "It would be easy to just jump in the suit and not know why. Just remembering that Hourman is Rick in his father’s suit is what he instilled in me. And it was always easy to remember that. We were there for his sister, Courtney Johns. Our show is about people searching for identities and motivated by grief and loss. Rick is Hourman’s heart and the powers are special because they are accentuated by a guy who doesn't know how to be responsible. He's a guy whose emotional volatility is going to make being Hourman dangerous."

Dangerous or not, all superheroes get a superhero costume. But Stargirl hasn't outfitted its new Hourman just yet. That will happen next week, Gellman confirms, with a moment fans actually saw months ago in the mega-crossover special "Crisis on Infinite Earths."

"That comes from a really iconic moment from our show," Gellman says. "You see the JSA together for the first time, fighting. I think that’s a crazy exciting thing to tease to people. We’ve all been anxious to have the show come out, so it’s cool to me that in a week you’ll see that moment fleshed out."

As Stargirl approaches the halfway point of its 13-episode first season, fans may be wondering whether there's a Season 2 in store. Gellman admits he doesn't know, but is optimistic.

"Everything is pointing in the right direction," he says. "This is about that time in the season when you know if you’re going back or not. We’ve been really lucky. I think it’s a vote of confidence that The CW brought us on after our season was made. They think we can revamp the DC family because shows like Arrow are ending. I feel optimistic."

Stargirl premieres Sunday nights on DC Universe at 11 p.m. Eastern. It airs Tuesdays on The CW at 8 p.m. Eastern.