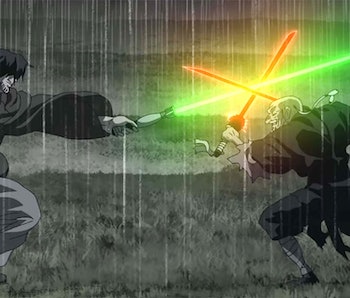 For the past few years, Star Wars has shifted ever-so-subtly away from what makes it, well, Star Wars. In Rogue One, Solo, The Bad Batch, and The Mandalorian Season 1, franchise mainstays like the Force, the Jedi, and lightsabers were suddenly way less important. But in Star Wars: Visions, everybody gets a lightsaber. Only this time, something’s different...

The Star Wars saga is, once again, fully embracing the biggest reason why everyone loves a galaxy, far, far away. Literally every single episode of the anime anthology series Star Wars: Visions has a lightsaber in it. The anime anthology is simultaneously reinforcing the most important part of Star Wars while also changing its very nature.

Before we go any further, the question needs to be addressed: does Visions count as Star Wars canon alongside movies like A New Hope and shows like The Mandalorian? In an interview, Visions executive producer James Waugh — who also serves as Lucasfilm’s vice president of franchise content and strategy — tells Inverse the answer is slightly more nuanced than you might think. Is Star Wars: Visions canon? Not yet, but maybe one day it will be.

“That's not what Visions was really set out to do.”

“I think that our intention was always, these are authentic star wars stories,” Waugh says. “Are they canon? That's not what Visions was really set out to do. Do I think I could see some of the technology or some of the characters, traversing media becoming live-action? You never know! That's the beauty of Star Wars. You get to see all sorts of cool stuff, kind of as different creators that come in, that we really want to empower creative visionaries to tell their stories.

So with that in mind, here are the five biggest ways that Visions shakes up Star Wars lightsaber canon; from Kyber crystals to lightsaber colors and much, much more. Spoilers ahead for Star Wars: Visions.

In the vast majority of Star Wars, lightsaber blades tend to be straight and usually around three feet in length. Yoda’s lightsaber, first introduced in Attack of the Clones, is considerably shorter, as is Ahoska’s smaller “shoto” lightsaber first seen in The Clone Wars. Saber staffs and double-bladed sabers were also much longer, but, for the most part, the lightsabers we’ve seen, tend to have a uniform design. (Even though Count Dooku had a curved lightsaber hilt his actual blade was straight.) In fact, other than the Darksaber and Kylo Ren’s crackling weapon, most lightsabers tend to be the exact same shape.

Not so in Visions! In Episode 7, “The Elder,” an evil warrior sports two curved lightsaber-daggers. In Episode 9, “Akakiri,” all the combatants wield lightsabers that are curved at the tip. In Episode 1, “The Duel,” the Sith-like Bandit Leader manages to create a kind of lightsaber umbrella, in which her single red blade manifests itself at different lengths thanks to a special attachment.

Lightsaber lengths are also adjustable in Episode 5, “The Ninth Jedi,” something that Kara demonstrates several times in that episode. The idea that a lightsaber could have adjustable lengths has appeared in Legends canon before. In the novel Dark Apprentice, this type of weapon was called a “dual-phase lightsaber,” and one of Luke’s students, Gantoris, wielded one.

But before Visions, we’ve never seen anything like a dual-phase lightsaber on screen. Both the Bandit Leader’s saber “umbrella” and the lightsaber wielded by Kara are pretty close.

Speaking of “The Ninth Jedi,” the Margrave’s green-bladed lightsaber sports a small circle around the blade at the base of the hilt. This is vaguely reminiscent of certain “crossguard” sabers we’ve seen before, but we’ve never seen one with a lit circle. The functionality of this part of the Margrave’s saber is unclear, but it sure looks cool as hell.

4. Lightsabers with writing on the blade

Although it's not explained how this even works, it appears that the family lightsaber wielded by Lop in “Lop & Ochō” has a series of characters written on the blade. Presumably, this can only mean that the Kyber crystal that powers this lightsaber has some kind of writing etched on it, too.

Speaking of Kyber crystals, nearly every episode of Visions features new ways to think about these crystals, from the bizarre way the crystals are used to power a super-weapon in “The Twins” to the fact that, apparently, a Kyber crystal can partially give life to a droid, as in “TO-B1.” Here are the big, unique takeaways of different ways Kyber crystals are employed in Star Wars: Visions:

This last change is easily the slickest and creates possibly the best twist in the entire series. The idea is that as soon as someone activates a lightsaber, it will reveal that they are good or bad. Hence, all the folks who we thought were Jedi are really Sith because of their red blades.

In the existing canon, a Kyber crystal and corresponding blade only turn red after it's been bled, meaning you have to do something awful with the lightsaber in order to get that red color. However, in “The Ninth Jedi,” the implication is that “tempering” these Kyber crystals makes the lightsabers sensitive enough to change color depending on who is holding them. Basically, a shortcut from the existing canon. When Inverse interviewed the creative team behind Star Wars: Visions, they commented on the canon implications of Kyber crystals’ many appearances across the nine episodes.

2. A lightsaber sheath or scabbard?

In “The Duel,” “The Elder,” and “Akakiri,” we get the sense that some combatants keep their lightsabers in some kind of sheath or scabbard. Now, in “Akakiri” and “The Elder,” these might just be ornate “holsters” for the hilts of lightsabers, but in “The Duel,” it really appears that Ronin withdraws his red-bladed saber from a long scabbard. This would imply the lightsaber is turned on all the time. This isn’t 100 percent confirmed, but if Ronin is rocking a lightsaber inside of a scabbard, we already know what that scabbard would have to be made of to make that work.

That’s right if Ronin (or anyone else in Visions) is using a sheath or scabbard for their turned-on lightsaber, then that means the material housing the blade has to be made of pure Beskar.

The last scene of “The Ninth Jedi” makes it seem like the asteroid above the planet is essentially a giant faux-lightsaber hilt, and the beam extending to the planet is the blade of that massive lightsaber. Is this legit though? Are we basically seeing a giant lightsaber stuck into the side of a planet? It’s not that absurd when you think about it.

In Rogue One, we learned that the Death-Star-super-laser used Kyber crystals to power its weapon. By the time of the events of “The Ninth Jedi,” it’s pretty clear lightsaber technology has possibly changed enough that creating a huge lightsaber blade in space isn’t out of the question.

So, if that is a giant space station lightsaber in “The Ninth Jedi,” the next question is, who picks it up?