“The Dark Side clouds everything” 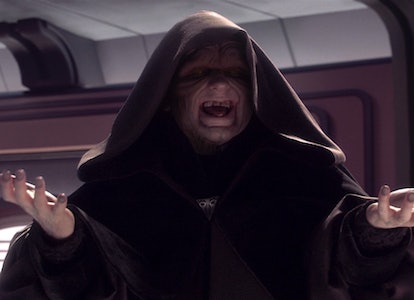 In a very real way, Order 66 is the centerpiece of the Star Wars universe. Much like the MCU’s Blip, the execution of this secret order caused a hard reset of heroes, with effects rippling throughout the galaxy.

We saw those effects in full force in the first two episodes of The Bad Batch — but perhaps there was a silver lining to Palpatine’s most dastardly plan, as this Reddit theory points out.

The Theory — Redditor u/EquivalentInflation suggests while Palpatine was operating incognito within the Galactic Senate, he was actively limiting the power of the Jedi running the New Republic.

If true, this theory explains why Jedi couldn’t make accurate prophecies about what would happen in the future. Using the Dark Side of the Force, Palpatine was clouding the Jedi’s visions of the future. But after Order 66, Palpatine dropped this limit so his own Force powers would be stronger. After all, he’d gotten rid of the important Jedi who could see the future...

Based on the theory suggesting Palpatine dropped his sway over the Jedi, the handful who survived Order 66 was now free from the Emperor’s grasp — allowing them to achieve far more than they conceivably should have without a master there to mentor them.

Rise of the Super-Jedi — There are three great examples of this sort of “super-padawan” phenomenon: Cal Kestis, Ahsoka Tano, and Kanan Jarrus.

Cal Kestis is probably the best example of this because of the nature of the video game he’s featured in, Jedi: Fallen Order. Cal is a former padawan forced out of hiding by Empire inquisitors. In fact, he has spent so long hiding his past that even he’s forgotten it. But over the course of more experiences, he regains more of his memory to the point where he can slaughter dozens of stormtroopers as if nothing happened.

Ahsoka and Kanan both had similar experiences, as they were at the padawan level when they were left to their own devices, and both of them basically were equivalent to a Jedi Master by the last time we see them, be that in live-action on The Mandalorian or in a heartbreaking sacrifice in Rebels.

Another explanation for these padawans is based on the Law of Conservation of Energy. If there’s a finite amount of Force available in the galaxy, wiping out thousands of Jedi would leave the remaining few far more powerful than they were before, even if they received minimal training. It’s a terrible tragedy, but it’s nice to see the good in it.

The Inverse Analysis — Of course, pulling the curtain back, this theory about Palpatine and the rise of so many powerful Jedi explains more than just a line about prophecy in the prequels.

Power-balancing has always been an issue in Star Wars, and over-powering protagonists with little-to-no Jedi training is a debate fans have been having since Luke first picked up a lightsaber and looked directly down the hilt. Maybe this is the solution everyone needs to explain the late-era Star Wars heroes.

Sure, these heroes may be too powerful, but don’t blame the Star Wars writers; blame Palpatine.