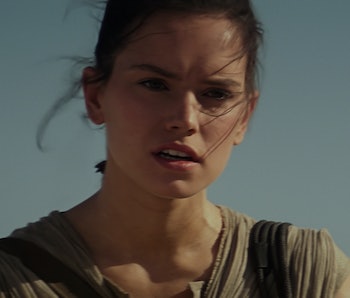 Say it with us: Rey isn’t a Mary Sue. After Star Wars: The Force Awakens came out, some fans criticized Rey for being too perfect, for lacking flaws, and for being too good at what she does — the typical traits of the flawless, personality-less “Mary Sue” trope. But that argument is pure tantuanshit, and it misses the point of Rey, of the Force in the Star Wars universe, and of the term itself.

“…It’s a name of a woman, and everyone was saying that Luke had exactly the same thing,” Ridley said. “I think Rey is incredibly vulnerable, and nothing she’s doing is for the greater good, she’s just doing what she thinks is the right thing. And she doesn’t want to do some of it, but she feels compelled to do it.”

The term “Mary Sue” comes from fanfiction, describing a character that’s often an author stand-in. The Mary Sue is too good at everything: too perfect, too well-liked, too flawless. She doesn’t fit into the narrow spaces we create for our female characters and often confine them to.

Ridley’s right: The “Mary Sue” concept is sexist, because it’s used exclusively to attack female characters when male characters like James Bond, Batman, and, yes, Luke Skywalker all share many of the same purportedly objectionable qualities. But even if you want to talk about Mary Sues, Rey isn’t one of them, mostly because she’s not a stand-in for a fan fiction author. She’s a fully realized character and just because we don’t understand her entire backstory yet doesn’t mean we won’t. Plus, all of her mad skills actually make sense in the context of what we do know.

Rey has lived most of her life alone on a planet where survival is hard-won. Out of necessity, she taught herself how to use a staff for protection. She scavenged to survive, studying ships and machines in the process. She taught herself what she needed to know in order to stay alive. And the moment Rey stepped foot on the Millennium Falcon, it was clear that her time on Jakku, however miserable, had prepared her for what would come next.

Rey’s arc is a journey, one that showcases her preparation and strength, but not her perfection. She’s Force-sensitive, which grants some degree of special ability in the Star Wars universe (see also: Luke), but on a definitional level, Rey isn’t a Mary Sue because she struggles, she’s vulnerable, and she’s not a stand-in for anyone.

The Mary Sue argument is reductive, designed not to be a genuine narrative criticism but an attack on female characters that display the heroic qualities often reserved for male characters. So go ahead, call Rey a Mary Sue. But know that when you do, the problem isn’t her — it’s you.