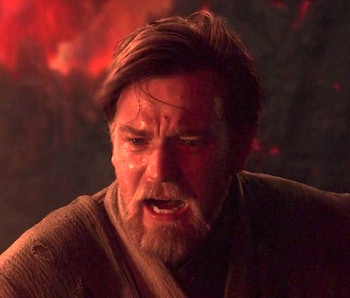 It's hard to imagine a more iconic moment in Revenge of the Sith than the epic fight between Anakin and Obi-Wan. From the bubbling lava of Mustafar to the intense lightsaber action, that scene took an entire trilogy of building resentment to the tipping point. However, not everything about it completely made sense. A fan theory intends to explain exactly why the fight ended like it did.

At the end of the duel, Anakin lays dismembered next to the river of lava, but Obi-Wan still leaves him for dead without finishing the job. Redditor Mixelangelo_00 posits this was entirely intentional. Obi-Wan remembered what Yoda said about the Chosen One prophecy being misinterpreted, and therefore assumed that while he would join the Sith, he eventually would destroy it as well, and so purposefully left him alive.

This theory has massive implications on the rest of Obi-Wan's arc. If Obi-Wan purposefully left Anakin alive, his encounter with Darth Vader in the later episodes is all the more heartbreaking. He let Anakin live in hopes it would mean the end of the Sith, but years later he's confronted with the consequences of his actions.

Who's your favorite character in The Mandalorian? Take the ultimate Mando survey now!

Vader's iron fist and planetary destruction are not at all what Obi-Wan intended. What's worse is that because of his death in the duel with his former apprentice, the Jedi never got to see Anakin redeem himself and truly destroy the Sith— at least until the rise of the First Order.

It also explains why Star Wars never canonically explains when Obi-Wan realizes Anakin is still alive. It was covered in the now non-canon book Dark Lord: The Rise of Darth Vader, but there's no canonical moment of realization. This means Obi-Wan may not have even had the epiphany, knowing he let Darth Vader live, hoping he would fulfill the prophecy and destroy the Sith.

As far as evidence against this, there's nothing in canon that would suggest Obi-Wan meant to leave Anakin for dead. He could have easily killed him, he did after all have the higher ground. The only thing that could possibly prove this theory false would be Disney+'s upcoming series Kenobi. Showing Obi-Wan in between the events of the prequel and original trilogies would give narrative room for fans to figure out exactly what was going through his head that night on Mustafar.

The Inverse Analysis — Enjoy this one while it lasts. An emotional plot point like Obi-Wan realizing what's become of Anakin will probably be too tempting to pass up for the writers behind the upcoming Disney+ series with Ewan McGregor, so it's likely the official canon explanation will be Obi-Wan fully intended to kill Anakin in the duel. Still, until Kenobi comes out (and that could be a long while) it's a great angle to look at Obi-Wan's story.