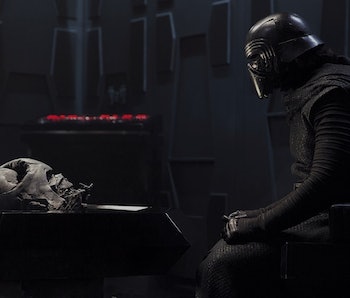 While Darth Vader’s castle made an appearance in Rogue One: A Star Wars Story, the Sith lord’s fortress and the planet of Mustafar haven’t had much of an impact on the latest Star Wars trilogy. Fans have been hoping that could change in Star Wars: The Rise of Skywalker. An intriguing new theory hints at the key role Mustafar could play in Kylo Ren’s journey in Episode IX, and the clue comes directly from the virtual reality game Vader Immortal: Episode III.

While Kylo Ren’s journey in Star Wars: The Rise of Skywalker is still up in the air, fan theorists have speculated that the new supreme leader is in search of an elusive “wayfinder” device. Basically, this device could be the key to finding Emperor Palpatine, and either bringing him back to power or defeating him once and for all. But how do Mustafar and Vader Immortal connect back to Kylo Ren and the wayfinder device?

Kylo’s devotion to Darth Vader is no secret, and in The Force Awakens he memorably vowed to finish what his grandfather started. The next logical step would be to go to the planet Vader made his home, right? That’s where this theory comes into play. With this in mind, Reddit user PeerTijd posted a screenshot of Kylo fighting in an unknown location from the most recent teaser of Episode IX. The redditor claims that this location could be Mustafar.

The theory argues that the evidence that Kylo’s on Mustafar lies in the surrounding vegetation. At first glance, this doesn’t make sense. After all, Mustafar’s surface is covered in lava, as we saw in Revenge of the Sith and Rogue One. However, according to the redditor, Vader Immortal pivots on the idea that Mustafar is able to somehow restore itself to a more hospitable state. You can see what the game’s version of Mustafar looks like below.

The red, ashy atmosphere and spindly trees seen in the VR game’s rendition of the planet looks a lot like the atmosphere surrounding Kylo in this Episode IX screenshot. Additionally, Vader Immortal director Ben Snow confirmed that the game is set on Mustafar, adding that the game’s story centers around “the idea that Vader is collecting ancient artifacts for some reason.”

It’s possible Kylo Ren ventures to a slightly cooler, ashier Mustafar in Episode IX to find the ancient objects Vader collected, whether as a means to enhance his own power, or to seek out Palpatine. Back in July, Making Star Wars shared some leaked concept art from The Rise of Skywalker, which depicted a (blurry) location with a “very Mustafar vibe.” It’s possible the volcanic planet could play a key role in the upcoming film. If nothing else, it would be cool to see Kylo reconnect with Vader, even if it’s indirectly, before all is said and done. Maybe we’ll even get a little Force ghost Anakin cameo while we’re at it.