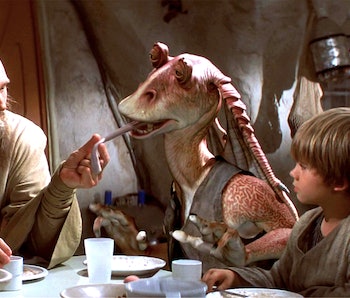 Shortly after its release, some cranky Star Wars fans claimed The Phantom Menace had retroactively made the original trilogy nonsensical. Yoda appeared not to have trained Obi-Wan, the Force was tied to microscopic lifeforms — the list of prequel-related grievances still runs long. Yet after two decades, something strange has happened: Everyone realized the prequel era was more interesting than the rest of Star Wars history.

Now that the sequel trilogy has wrapped up with The Rise of Skywalker, it appears the future of Star Wars will be its own past. The final season of The Clone Wars was popular enough to inspire a new Bad Batch spinoff series. The next major Star Wars publishing project, The High Republic is a prequel of the prequels, and the recent Marvel Star Wars comic series brought Darth Vader back to the planet Naboo.

It's also unclear what the next batch of Star Wars movies will be about, but if any of them end up being an exploration of the super-old Republic, no one will be surprised. For some reason, fandom seems mostly interested in how the prequels connect to everything else.

Big rumors involving The Mandalorian Season 2 casting are linked to prequel nostalgia, and the existence of Kenobi is the same. In other words, nobody seems to be demanding a Wedge Antilles show, and we already know that Solo – a film centered on classic trilogy mythology — was the least popular of all the new Star Wars films. This may change in the next ten years or so. But right now, interest in the prequels, or at least the mythology of the prequels, seems to trump all other Star Wars interests.

Here are three reasons why.

In contrast to the prequels, the political logistics of classic trilogy and the sequel trilogy are barely comprehensible. It's not that the other two trilogies don't make sense, but the world-building relative to the prequels a little more slapdash. The Rebellion and the Resistance are both defined by what they aren't, but that means we have really only a vague sense of what they are.

The origin of the overly formal military ranks and distinct spacecraft within the Rebellion has an explanation, of course, but it really makes you wonder why they're so formal. Flying an X-Wing is the easiest way to announce that you are a Rebel, but if the point of the Rebellion is "strike from a hidden base" and really take out the Empire, the idea of having flashy ships and uniforms feels slightly silly. In the sequels, this makes a little more sense, when you consider that the Resistance is simply trying to restore the New Republic, and all their ships and uniforms were formerly New Republic ships. (The Mandalorian proves this is true, basically.)

Although novels and comics explain the origin of the Resistance and the First Order, the world-building there is just slightly less believable. In The Force Awakens, we're told that the First Order is basically just a giant military junta, they're not a government like the Empire. Ditto the Resistance. This attempt to duplicate the status-quo of the classics, only makes the sequels less realistic. Resistance or Rebellion, if you think about the details about how these organizations function, you start to really question how these rebels got anything down at all. At the risk of giving a backhanded compliment to all the great writers who have written books that have explained the behind-the-scenes logistics of the Rebellion, the First Order, and the Resistance, the fact that some of this stuff isn't explained in the movies is part of why the world-building was left for novelists to figure out.

If we leave the "Chosen One" debate aside, the actual political machinations of the prequel-era is meticulously explained on-screen. In fact, the plotlines of all three prequel films are guided by the world-building. No attempt is made by George Lucas to downplay that Phantom Menace, Attack of the Clones, and Revenge of the Sith are about space politics. The films are proud of that fact, and as a result, space politics feel more fleshed-out than in the other eras. Figuring out what the Empire or the First Order wants in the other trilogies is a little tricky, but charting Palpatine's rise to power in the prequels is far easier.

What does the Trade Federation do? Well, it's a corrupt for-profit government that intimidates other planets into unfair trade deals, often by straight-up invasion. Their motivations are profit, and they are allowed to operate thanks to corruption in the Senate. Again, contrast this with the First Order. What is the First Order? It's um..an army? How did it get funded? Well, if you want the answer to that, you have to read some of the books, and the short (slightly unconvincing) answer is: Leftover Empire stuff. This is just one example, but the prequel era is unique insofar that nearly every answer to your questions are actually presented on screen in the three prequel films, or, in presented dramatically in The Clone Wars. There's nothing wrong with books and comics filling in some of the canon gaps, or explaining things that are confusing in the films, but it's nice when it's not necessary.

When you watch an episode of The Mandalorian or the first 20 minutes of A New Hope, there's almost an impressionistic approach to how these sci-fi/fantasy contexts are depicted. With these examples, the viewer isn't really encouraged to think that hard about the world in which everything takes place, and that's because the story is already happening. For better or worse, the prequels aren't like this. From the first moment of The Phantom Menace, we're already in the political weeds. Everybody is talking about the taxation of trade routes, and which part of the galaxy is controlled by which factions. It's very possible this is a less-efficient way to tell a Star Wars story, but the fact is, the complicated world-building of the prequels is part of what makes the rest of Star Wars possible.

With the prequel era, George Lucas set out to answer the general question of "why" when it came to several things about the classic films. Twenty years ago, some fans would say we got more than we bargained for. (Patton Oswalt's vintage rant about George Lucas' desire to explain everything comes to mind.) But, if the prequels hadn't been as detailed and concerned about world-building, then it's possible that the rest of the Star Wars saga couldn't exist. Obi-Wan called this era "a more civilized age," but the truth is, it was also a more realistic one, too.