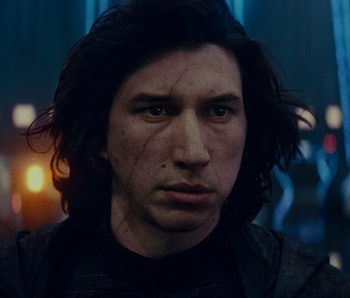 Everything we know about the creation of Star Wars: The Rise of Skywalker reveals one simple truth: the movie was a total mess inside and out. After Colin Trevorrow was fired and J.J. Abrams returned, Lucasfilm rushed production to meet its predetermined premiere date, even resorting to editing the movie while it was being filmed. The results speak for themselves.

Now, a new leak reveals one more problem with the production of Star Wars: Episode 9, and if this one is to be believed, it could change everything we know about the entire sequel trilogy — and Kylo Ren’s story, in particular.

This leak comes from Twitter user @dxrklinasdyad, who themselves say you should take it with a grain of salt despite citing a trusted source. To be honest, even that may be giving this sketchy rumor too much credit, but it’s also way too interesting to ignore. So let’s take a closer look.

The leaker begins by claiming that Adam Driver didn’t know his character Kylo Ren was dying at the end of Rise of Skywalker until either the day his death scene was filmed or even later. Not only that, but apparently Driver filmed multiple scenes set after the battle on Exegol. They go on to speculate that Kylo was supposed to join the Resistance celebrations at the end of the movie, possibly show up with Rey in the final scene, and even met with Lucasfilm boss Kathleen Kennedy — presumably to discuss a Kylo Ren spinoff of some sort.

Again, this is an extremely questionable leak, but if it’s true, it really would change everything we know about Kylo Ren. It’s wild to think we almost got a movie where Ren survived and got to join the good guys once and for all. Unlike his grandfather Anakin, Ben Solo almost managed to betray the Emperor and live to tell the tale.

As we know, none of that happens in the actual movie, but whether it was even filmed will likely remain a mystery for years. It’s possible that in a decade or so when all the Rise of Skywalker NDAs expire, Driver and the rest of the cast will be allowed to reveal what actually went down on the set of Episode 9. But until then, all we have is sketchy leaks like this one.

Star Wars: The Rise of Skywalker is streaming on Disney+.

More like this
Entertainment
Jan. 24, 2023
The Last Jedi's greatest innovation was actually JJ Abrams' idea
By Dais Johnston
Entertainment
4 hours ago
In Knock at the Cabin, a Terrific Dave Bautista Saves M. Night Shyamalan From Himself
By Hoai-Tran Bui
Entertainment
Jan. 26, 2023
Attack the Block sequel will take a page from the two greatest sci-fi sequels, director says
By Eric Francisco
LEARN SOMETHING NEW EVERY DAY.
Related Tags
Share: