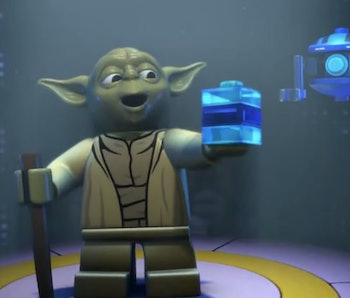 7. R2-D2 knew about Palpatine all along — The Lego episode "The Phantom Clone" contains a lot of jokes about how Palpatine switched back and forth between being his "Palps" self and his "Sidious" self. While Dooku and Grievous may have been in the dark about this distinction, one person in this episode totally gets it: R2-D2. He mentions this several times, and even tries to tell everyone that Palps and Sidious are one and the same. Nobody listens.

This episode also introduces Lando's dad "Lindo Calrissian." The less you know about that, the better.

6. Dooku made a three-headed Grievous clone — When Dooku tries to make a Sith Clone Army in "Who Let the Clones Out," it accidentally results in a three-headed clone of General Grievous. Like all Lego stuff, this is not canon, but damn, with all the theories about cloners on Kamino having something to do with Baby Yoda, maybe we should revisit this one.

There is no word if these three will appear in the new Holiday Special, or just how many asprin you'll need to take if they do.

4. Remember the Rebel Base on... Mustafar? A lot of the weird non-canon of Lego Star Wars stuff happens within a context called "The Yoda Chronicles" or "The New Yoda Chronicles." These things are essentially the same, and as they went on, didn't actually have all that much to do with Yoda.

Case in point: in "Clash of the Skywalkers" (part of the Yoda Chronicles) the Rebel Alliance fakes Luke Skywalker's death, and decides to move their base from Hoth to Mustafar. Yeah, we're talking the same place where Darth Vader's castle is located, but in fairness, this short was made way before anyone knew Darth Vader had a castle on Mustafar.

3. Leia and Han teamed up with Gungans — In the Lego installment "The Empire Strikes Out," the Rebels hit up their old friends, Boss Nass and the Gungans. In this storyline, a Stormtrooper base exists on Naboo, which, actually makes sense. Palpatine was from Naboo after all, so it seems reasonable that Stormtrooper recruitment probably happened on that planet after the Empire came to power. This episode is mostly unconcerned with that. It's mostly interested in getting you excited about the Gunguns palling around with Han and Leia, which we all just know you were dying to see.

2. Han Solo was Yoda's secret Padawan — In the "Padawan Menace," an early Lego adventure starring Yoda, a super-talented Jedi Padawan named "Ian" manages to impress everyone with his amazing skills and daring heroics. At the very end of the story, it's revealed that his nametag was mislabeled, and the "I" in his name is really an "H." This makes zero fucking sense when you consider that the Star Wars alphabet does not use English characters, but instead, is dominated by an alphabet and language called Aurebesh.

That said, actual Star Wars canon plays fast-and-loose with this idea since they have ships named A-Wings, X-Wings, et al. Not to mention, Poe created Finn's name from the alpha-numeric code FN-2187, imply that a phonetic understanding of an "F" and an "N" is something Poe knows, even if his actual alphabet doesn't reflect that at all. Anyway, half the people in Star Wars are probably illiterate anyway, so maybe this thing with Han's name being "misspelled" on a nametag should be canon.

1. A lightsaber made entirely out of crystals — Without a doubt, the best Lego Star Wars thing is the miniseries called The Freemaker Adventures. Following the titular family of Freemakers, one storyline deals with the discovery of an ancient lightsaber made entirely out of Kyber crystals. Basically, this was like a physical sword that also looked like a lightsaber. It's weird and awesome, and it feels like it should be canon right now. In fact, just the idea of a crystal lightsaber feels more interesting than anything mentioned in the new Star Wars Holiday Special. Let's get this crystal saber into the next movie!

You can stream all Lego Star Wars stuff on Disney+ right here.