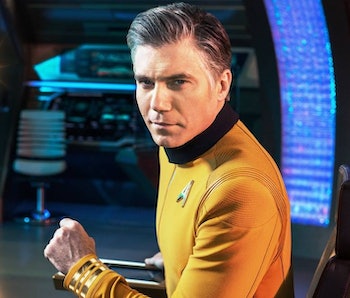 Every time there's a new Star Trek movie or TV show, at least one "rule" about the vast Star Trek canon gets changed, rewritten, or rebooted. This has been going on since the first Star Trek series made up its own rules as it went along, and it's been happening ever since. Every once and a while, an installment of Star Trek comes along that specifically fixes some of those canon cracks with starship glue that would make Scotty blush.

Sometimes it's one line of dialogue. Sometimes its entire episodes, like the 2005 Enterprise episode "Affliction," which specifically tried to explain why so many Klingons look so different from each other. With the announcement of the new prequel series, Star Trek: Strange New Worlds, some confusing contradictions leftover from Discovery, Enterprise, The Original Series, and Deep Space Nine can be fixed once and for all.

By the 24th century of The Next Generation and Deep Space Nine, the covert Starfleet group called Section 31 was so top secret, that most of Starfleet didn't even know about it. But, in Discovery, we learned that there was a time, in the 2250s when Section 31 operated much more out in the open. Heck, they even had nifty little all-black Starfleet badges, to broadcast that, they were part of a covert organization. By the end of Discovery Season 2, it's suggested that Ash Tyler (formerly the Klingon Voq) will take over Section 31.

We might assume that Ash will be responsible for taking Section 31 more underground, thus resulting in the nearly undetectable version of the organization we saw in DS9. Then again, since Pike and the crew of the USS Enterprise circa 2258-ish are uniquely aware of what Section 31 was up to, will they cross paths again?

In The Original Series, Kirk and Spock often engage in espionage for Starfleet Command, as in "The Enterprise Incident," when they try to steal a cloaking device from some Romulans. Obviously, nobody mentions Section 31 at that point in time, so you gotta wonder, was it still around? And was it really being run by a guy who used to be a Klingon?

4. What happened to the Klingon ceasefire?

At the end of Discovery Season 1, full-on war with the Klingon Empire was pretty much over. Season 2 saw its leader, High Chancellor L'Rell, actively invested in keeping the peace. L'Rell's desire to bolster the Klingon Empire through peace continues in the IDW tie-in comic book miniseries, Aftermath, which takes place right after the events of Discovery Season 2. Yet by the era of the original series in 2265, the Klingons will be 100 percent mobilized against the Federation. If Strange New Worlds has any run-ins with the Klingons, then it's a good bet that Pike, Spock and Number One will meet L'Rell again. If they do, it's likely she'll be kicked out of power by Klingons on the warpath.

3. What happened to the Discovery-era Klingons?

Back in 2017, fans freaked out about Discovery's redesign of the Klingons, who had ears and claws that made them look more like Nosferatu. They were also bald. In Season 2 of Discovery, some of this was retconned a little bit — the Klingons all grew their hair out during peacetime. But, the big-headed, monster feel of the DISCO-era Klingons remained. In the Discovery Season 2 finale, we saw at least one Klingon in the background who looked more like a TNG-era Klingon. Meanwhile, in that same Aftermath comic, we also met the TOS-era Klingon, Kor, who, like all other TOS Klingons, has a totally smooth head. But Kirk's time on the Enterprise, every single Klingon we'll meet will be smooth-headed, and look nothing like the TNG-era Klingons or the Discovery Klingons.

So what happened? Part of this was "answered" in that Enterprise episode "Affliction," in which it was made clear that huge portions of the Klingon population were affected by a genetic virus that made them look more "human." But, that still doesn't explain the absence of the Discovery-era Klingons in the rest of the franchise. If Strange New Worlds has any interactions with Klingons, it seems likely we'll meet the smooth-headed variety, and maybe even learned what happened to the Klingons who dominated most of Captain Pike's early days.

2. When did the Enterprise change its design — again?

At what point in Strange New Worlds will the classic USS Enterprise go entirely retro? Smartly, Discovery Season 2 already offered more than one low-key explanation for why the TOS Enterprise was more low-tech than the 2057 version: Pike ordered an intentional downgrade of the holographic projector system. But, the throttling of the futuristic tech might get more extreme in Strange New Worlds. Season 2 of Discovery demonstrated the Federation was overly reliant on automated technology and A.I.

Another controversial aspect of Discovery Season 1 was the new blue and gold Starfleet uniforms, which seemed to contradict the previously established uniforms from the TOS pilot, "The Cage" and most of the original series. This discrepancy was first addressed by a tie-in Discovery novel called Desperate Hours in 2017, and attacked head-on in the Season 2 debut of Discovery, "Brother," and then again in the two-part season finale, "Such Sweet Sorrow."

In "Brother," Pike made a reference to the Enterprise having been given the "new uniforms," but it's never made entirely clear as to why. Plus, though the colors of Pike's Enterprise crew members are basically "correct" to make it match up with The Original Series, the styles don't match up with either "The Cage," the second original series pilot, "Where No Man Has Gone Before," or for that matter, with the rest of The Original Series. In other words, the uniforms are much closer to what we think they "should" be by 2265, but they're still different enough to make you raise a Vulcan eyebrow.

Strange New Worlds doesn't necessarily have to address these various discrepancies head-on, but it seems really unlikely that they won't. If anything, there will be several jokes made about the uniforms, and at least one of those jokes will probably be a retcon.

Star Trek: Strange New Worlds does not yet have a premiere date.