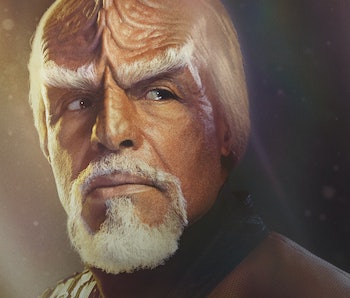 The sky’s the limit! In the final season of Star Trek: Picard, the series will bring back 1990s nostalgia for The Next Generation crew in a big way. But even though the latest trailer for Picard Season 3 gives us our first glimpses at some familiar TNG favorites, one face is missing. Here’s why this heartwarming Star Trek reunion also creates a new mystery.

On July 23, at the San Diego Comic-Con Star Trek Universe panel, a brand-new trailer for Picard Season 3 was revealed. In it, each major character from the upcoming season is featured, including...

Following a teaser back in April 2022 which confirmed the entire TNG cast for Season 3, this Picard trailer gives our first look at several legacy characters in new Starfleet uniforms, specifically a new uniform style for Geordi, and an utterly badass look for Worf. It also reveals, for the first time, Seven of Nine in a command-style Starfleet uniform, sparking hope for those who believe a Seven/Raffi spinoff series might come after Picard concludes in 2023.

But for all the TNG nostalgia, this trailer omits one specific actor, which actually creates a bizarre mystery.

Although Brent Spiner was previously confirmed for Picard Season 3, he doesn’t appear in the new trailer, and Paramount didn’t release a new character poster connected to Spiner, either.

So who is Spiner playing in Picard Season 3? Data is 100 percent dead at the end of Picard Season 1, while Spiner’s Season 2 character, Adam Soong, very clearly lives in the 21st century. Right now, this mostly leaves Data’s human brother, Altan, Data’s evil twin brother Lore, the prototype android B-4, or a new character.

Because Picard Season 3 has been billed as a send-off for The Next Generation crew, at some point, Brent Spiner’s involvement will be clarified. But for now, it’s interesting that, yet again, the return of Data — or someone who looks like Data — has been set up as a major mystery in Star Trek: Picard. We know androids dream of electric sheep, but does Data dream of immortality? And if Data isn’t back in Season 3 of Picard is it really a Next Generation reunion?

That said, on the SDCC panel, producer Alex Kurtzman did confirm that Brent Spiner will return as “an old new character.”

In another interesting tidbit from the Picard Season 3 panel, Patrick Stewart mentioned that the season will feature “more than one Enterprise,” and referenced spending some time on “the old Enterprise.” This could imply time travel, alternate universes, or something else!

Do we know the Picard Season 3 release date?

At the Star Trek Universe panel at San Diego Comic-Con, it was confirmed that Picard Season 3 will hit Paramount+ sometime in 2023. It’s unclear as to when the season will be released, but based on the two previous seasons, early in 2023 is a good bet.