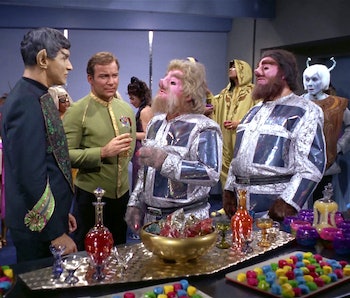 CBS/Paramount
We may receive a portion of sales if you purchase a product through a link in this article.
Ryan Britt
November 28, 2022

Star Trek aliens are infamous for having species-defining characteristics. Vulcans are logical, Klingons like to fight. But the newer Trek shows have been pushing back on the sci-fi stereotypes of the Final Frontier. Lower Decks showed that not all Orions are pirates, and on Prodigy we’re getting new sides of the cranky, argumentative Tellarites. As Jankom Pog, Jason Mantzoukas is revealing new layers of a previously one-note alien. Spoilers ahead for Star Trek: Prodigy episode 15, “Masquerade.”

In the 1967 Star Trek episode “Journey to Babel,” Spock’s father, Ambassador Sarek, characterized the cranky pig-like Tellarites very specifically, and perhaps with prejudice, saying, “Tellarites do not argue for reasons. They simply argue.” And while Spock’s dad might have had his reasons for getting into it, Star Trek: Prodigy is creating a more generous view of the Tellarites.

Mantzoukas, who voices Prodigy’s resident Tellarite, puts it like this: “His contrarianism isn’t because he believes the opposite, it's because he needs to voice the opposite. He needs to offer the opposite viewpoint. It’s not the hill he’s going to die on.”

Although Star Trek is often lauded for its diversity and representation, contemporary scrutiny means the older shows sometimes fall short of Trek’s own ideals. Sarek may have deployed an insult because he assumed Tellarites liked insults, or maybe the contrarianism of Tellarites just lacked nuance. Before Prodigy, a Tellarite has never appeared as a regular character in an ongoing series. That’s a little funny considering how pivotal this alien species is within the Federation’s timeline.

“Tellarites are one of the first Federation members!” Mantzoukas says. “So, when Jankom learns that, he thinks he’s royalty. But then he finds out that the name ‘Pog’ is what Tellarties think of as a runt. He’s brought high, and then he’s brought low.”

For Mantzoukas, expanding the facets of the Tellarites is just one part of Prodigy’s appeal. From his perspective, the power of this specific Trek series is that it’s doing something no other version of Star Trek has done before, which might give it more in common with The Lord of the Rings than anyone has realized.

“It’s almost a Tolkien-esque fellowship,” he says. “This is absolutely a call to adventure for a group of people who don’t know each other. When they first meet, none of them speak the same language. It’s not until they discover the Protostar that they are able to have translation devices and talk to each other.”

Thinking of the crew of the Protostar as the “Fellowship” of Star Trek works in more ways than one. Mantzoukas is right to point out that the crew has the same rag-tag quality as the members of The Fellowship of the Ring, but Jankom Pog, Dal, Gwyn, Zero, Rok-Tahk, and Murf are also on a quest to destroy the horrible “Living Construct” at the center of their ship. Is the destructive Construct the “One Ring” of Star Trek canon?

“Look, if you’re a hardcore Tolkien person, you could crush me,” Mantzoukas says with a laugh. “But this a journey of self-discovery inside this high adventure. To me, the most important and significant and exciting thing about Prodigy is that it’s about young people. Period.”