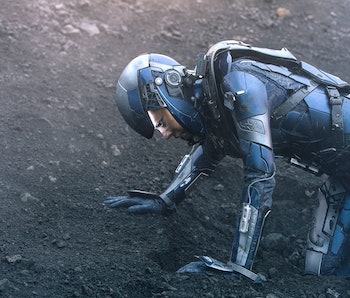 Just hours after the Season 1 finale of Picard debuted on CBS All Access, the network dropped a brand new teaser for Season 3 of Star Trek: Discovery. While numerous TV shows and films are currently on indefinite hiatus due to the coronavirus pandemic, it seems we'll be getting new episodes of Discovery in the near future.

The latest teaser CBS shared on Twitter is brief, clocking in at just 15 seconds. In it, Michael Burnham (Sonequa Martin-Green), grasps a billowing Federation flag amid a desolate, rocky landscape with a yellow and red sky. What appears to be a desolate moon hangs in the distant sky. Burnham isn't wearing a Starfleet uniform, but a dark ensemble with a long leather vest and slim leather trousers. She wears her hair in long braids and her face carries an expression of grim resolve. As the familiar blue flag billows in the background, a title card for the show says "new season coming soon."

While this isn't a firm release date, it seems to rebut chatter from earlier this month among the show's cast. On March 18, Wilson Cruz (who plays Dr. Hugh Culber) hosted an Instagram Live chat session with his followers. Naturally, an eager Star Trek fan popped up to ask about Discovery Season 3. While Cruz didn't have much information to share, his co-star Anthony Rapp (who plays Culber's partner, Paul Stamets) posted a comment that the show was still in post-production, and the process may be "slower" than usual due to editors and VFX teams working from home. Thankfully, it seems those potential delays won't be as lengthy as fans may have feared.

CBS All Access is currently running a promotion for an extended free trial until April 23. In order to take advantage of the offer, you'll need to enter promo code GIFT. If you're looking to catch up on previous seasons of Discovery, or binge all 10 episodes of Picard now that the first season has ended, this is your chance.

There may be some significance to infer from the end date of April 23. If we had to venture a guess, we'd expect that CBS's tentative plan is to start airing Discovery Season 3 shortly after that trial promotion ends, barring any unforeseen complications in the production schedule. The Discovery showrunners shared a lengthy preview for the upcoming season at New York Comic Con way back in November 2019, and filming officially wrapped in February 2020. It's fair to assume a good chunk of the season is nearly ready for prime time.

The first season Discovery was split into two distinct halves, with a midseason gap of about six weeks. It's possible that Season 3 may take a similar approach, if the later episodes still require more post-production work.

Seasons 1 and 2 of Star Trek: Discovery are available now on CBS All Access.