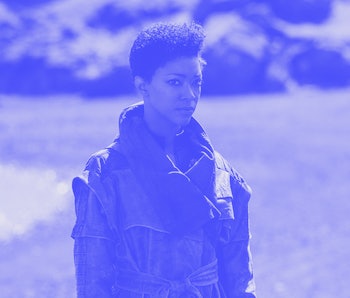 With just days to go until the season finale of Picard, fans are already wondering when they can expect the next batch of new Star Trek. It's been widely assumed that Discovery Season 3 will follow on the heels of Patrick Stewart's hit return to his iconic Next Generation role. However, two actors among the Discovery cast recently made comments on social media that suggest we might be in for a longer wait than we expected.

Like so many others confined to their homes amid the coronavirus pandemic, Wilson Cruz, who plays Dr. Hugh Culber on Discovery, spent a good chunk of time on social media last week. During an Instagram live chat with his followers, Cruz was asked about the timeframe for Season 3. Cruz didn't have much information to share at that moment, though one of his costars did.

Anthony Rapp, who plays Culber's partner Paul Stamets, chimed in during the live comments. Rapp pointed out that while post-production work on Season 3 is still ongoing, it's being done from home and may take longer than normal. Cruz didn't notice the comments until after he was done streaming, and later shared his costar's observations on Twitter.

Rapp and Cruz's comments fall short of officially confirming a delay of Discovery Season 3, but they also aren't good news for fans hoping to catch up with Michael Burnham and the gang shortly after the season finale of Star Trek: Picard airs March 26.

Filming on Season 3 officially wrapped in late February, and post-production for VFX-heavy shows like Discovery can often take several months. However, many Trek fans – ourselves included – have been predicting the season premiere would come shortly after the Picard finale, in April or May.

There are a couple compelling reasons for this: CBS will want to retain that bumper-crop of subscriptions tied to the Picard wave, and we saw a pretty lengthy teaser for Discovery's next arc at New York Comic Con back in October 2019. That footage suggested that production on the new episodes was well underway several months ago.

While some editing and visual effects work can be done remotely, Rapp and Cruz's comments suggest that it might take time for Discovery's post-production team to get fully accustomed to this temporary new normal.

Or maybe this is all just an elaborate ploy to throw us off the trail of a surprise early-April launch. Fingers crossed.

Star Trek: Discovery Season 3 does not yet have a release date.