More of a slog than a rocketship ride 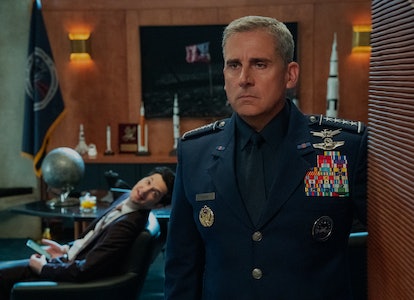 Greg Daniels is having a moment. After seven years out of the spotlight, the TV writer and producer best known for his work on The Office is back with two exciting new workplace comedies. Upload premiered May 1 on Amazon to mostly positive reviews thanks to its seamless blend of comedy, romance, and sci-fi intrigue. And then there's Space Force.

Despite its name, Space Force takes a more grounded approach than Upload, focusing on the men and women tasked with creating this new branch of the military invented by our own real-life president. Combine that simple premise with an all-star cast (Steve Carell in his first sitcom role since The Office, along with John Malkovitch, Lisa Kudrow, and Ben Schwartz, to name just a few) and you should have a winning formula and a new hit for Netflix.

Instead, Space Force fails to launch, delivering a few memorable laughs and not much else. One-dimensional characters, boring episodic plotlines, and the bizarre choice to veer away from comedy in the finale make Space Force's 10-episode first season more of a slog than a rocketship ride.

Space Force begins as Mark Naird (Carell) is promoted to four-star general and immediately tasked with launching Space Force. After a moment of shock, we jump to the near future where Naird, his family, and an entire new branch of the military have relocated to middle-of-nowhere Colorado. With this expensive new operation under pressure from the federal government — including an obvious stand-in for Alexandria Ocasio-Cortez and a Trump parody we only see in text messages and tweets — Space Force rushes to get "boots on the Moon" while facing competition from China.

There should be plenty of comedy to mine in that premise, along with a bit of drama and intrigue to keep your Netflix binge at full momentum, but Space Force doesn't know what to do with any of its characters or stories. The show can't decide if it's near-future sci-fi or political satire let alone whether it's a comedy or a drama, and it manages to squander nearly every character in what should be a legendary cast.

Carell exemplifies everything wrong (and right) with Space Force. The show's best comedy comes from The Office alumni as he channels his inner Michael Scott. (Naird is much smarter than Michael but equally out of his depths running a space operation.)

In one of the show's funniest scenes, Carell attempts to coach an astronaut monkey through repairs in space from his command center back on Earth. In another (spoiled in the trailer), he locks himself in his office and sings The Beach Boys to overcome a panic attack.

Carell is also an accomplished dramatic actor, and he's more than up for the task here. Unfortunately, while Space Force wants you to take it seriously, it never earns that right. The family drama at the heart of Space Force feels formulaic, and while the international intrigue might be fun, it's never juicy enough to keep you interested. (Also, Carell's gruff military voice will likely go down as one of the weirdest acting choices since Tom Hardy's faux Brooklyn accent in Venom.)

The rest of the cast is treated even worse than Carell. Lisa Kudrow plays Naird's wife who barely gets enough screen time or enough jokes. Ben Schwartz plays an annoying social media manager referred to by his coworkers as "Fuck Tony" who's equally annoying to watch, while John Malkovitch has a standout role as Space Force's lead scientist and Carell's odd couple colleague.

Jimmy O. Yang (Silicon Valley) shows off his range with one of the more believable romantic subplots of the series. Chris Gethard and Fred Willard also have small but memorable comedic roles that fade into the background as Space Force incomprehensibly veers away from comedy in its final act.

And that's the part I really don't understand. I get why this show exists. I get why it sometimes works (mostly thanks to Carell and the occasional bit of good writing). I also get why it mostly doesn't (a lack of direction and a murky premise). But I'll never understand why Greg Daniels decided his Netflix comedy needed to become a drama two-thirds of the way through.

If you make it that far, prepare to be baffled by a very weird and very unfunny finale. But the smartest thing you can do is stop watching after the first few episodes of Space Force. Better yet, do yourself a favor and just watch Upload instead.

Space Force touches down on Netflix May 29.

More like this
Entertainment
6 hours ago
Wolf Pack is proof that supernatural teen shows can still be bad
By Dais Johnston
Culture
Jan. 11, 2023
Vikings: Valhalla Season 2 brings even more beserker blood and action
By Mónica Marie Zorrilla
Entertainment
Jan. 18, 2023
Everything you need to know about That ‘90s Show on Netflix
By Claire Fox
Related Tags
Share: