“it’s a bridge between the two companies.” 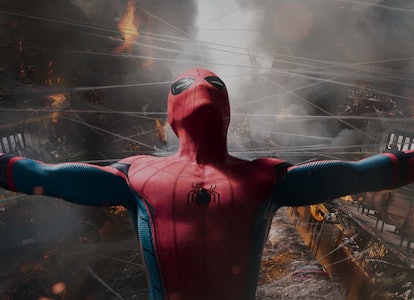 It wasn’t long ago that Disney and Sony terrified Marvel fans everywhere with their very public spat over the Spider-Man franchise. Nearly two years later, the once-warring Hollywood giants seem friendlier than ever.

That new camaraderie comes courtesy of an unprecedented streaming agreement, one that will see Sony’s Spider-Man eventually swing onto Disney+ alongside the rest of the Marvel Cinematic Universe movies. Is it a sign that Peter Parker’s future in the MCU is brighter than so many fans fear? Keep those webbed-fingers crossed, but one analyst tells Inverse that this deal could lead to a lot more of Sony’s Spider-Man at Disney-owned Marvel.

According to Paul Dergarabedian, Senior Media Analyst for Comscore, Disney and Sony may be laying the foundation for future collaborations beyond the upcoming Spider-Man: No Way Home.

“I think it’s a bridge between the two companies,” Dergarabedian says. “No company would do this if there was no upside. It’s predicated on the movies being good, and there is a track record that creates this confidence.”

What Happened — Rival studios Sony and Disney have reached an agreement of undisclosed financial terms that will see Sony movies — including existing and future Spider-Man films — stream on Disney platforms like Hulu and Disney+ and on Disney television channels. The deal is expected to begin in 2022 and last through 2026.

Keith Le Goy, president of worldwide distribution and networks for Sony, told Variety: “We are thrilled to team up with Disney on delivering our titles to their viewers and subscribers.”

Inverse contacted Sony regarding the future of the Spider-Man movies in light of the Disney deal. Sony could not be reached for comment.

The Sony/Disney pact was announced a mere two weeks after Sony came to a separate agreement with streaming titan Netflix that secures Sony movies for “Pay 1,” a period of time for distribution that begins roughly nine months after a movie’s theatrical release. (A more complete look at Netflix’s access to Sony films is detailed by Variety.) Disney has secured “Pay 2” for Sony movies, which is typically when a movie begins airing on TV.

What This Means for the MCU — For Spider-Man fans, here’s what the news means on the most immediate level: you will soon see Spider-Man: Homecoming (2017) and Spider-Man: Far From Home (2019) on Disney+ with the rest of the MCU, beginning in 2022. For newer movies like Spider-Man: No Way Home (out December 2021), fans will see the movie first in theaters, then on Netflix, and then on Disney+.

All of that sounds neat, especially for Spidey web-heads. But what about the future of Spider-Man? What happens after Spider-Man: No Way Home, which lead actor Tom Holland has confirmed is the last movie in his contract despite also saying he wants to make more movies as Peter Parker?

If you want to breathe a little easier, this might provide some comfort: Comscore’s Paul Dergarabedian endorses my own hunch that Sony/Disney’s pact is a sign the studios will continue producing more Tom Holland-led Spider-Man movies after No Way Home.

“It’s an advantageous situation for both studios, for the benefit of one of the most beloved and financially successful superhero franchises,” he says. “No one would be clamoring to get the rights for these films if they were terrible and not regarded by critics and fans.”

The new agreement stands in stark contrast to August 2019, when the same participating studios had a public spat that briefly led to Spider-Man’s exclusion from the Marvel franchise.

On September 27, 2019, the dust settled and the studios came to a new agreement that would result in one more stand-alone Spider-Man — which we now know is Spider-Man: No Way Home — and one more appearance of Spider-Man in an MCU movie. The latter film remains unknown.

The new Disney/Sony pact isn’t exclusively about Spider-Man; other Sony franchises like Jumanji, Hotel Transylvania, and upcoming 2022 movies like Uncharted and Bullet Train are part of the deal. Almost all of Sony’s upcoming film slate will be found on either Hulu or Disney+ following their theatrical and Netflix releases.

But the potential windfall that will benefit both two studios — which Cynthia Littleton observes in Variety is “worth hundreds of millions of dollars to Sony” — is a visible sweetening of a pot that can only encourage both Sony and Disney to work on more Spider-Man.

“This deal fulfills needs for both companies that are seeing a benefit to this,” Dergarabedian says. “There’s a lot of revenue to be had. There are so many moving parts in terms of revenue stream for a franchise like Spider-Man. For the companies that control all or part of the content, it’s about making the best decisions. For consumers, it’s just going to be a one-stop-shop for Marvel when they’re on the small screen.”

The Inverse Analysis — Streaming is the future. For Spider-Man, Disney and Sony have provided a way for the lucrative superhero to keep swinging in a way that is clearly beneficial to both studios — and therefore beneficial for fans, with good odds that Peter Parker’s time in the MCU is far from over.

“Content is king,” Dergarabedian says. “Subscribers make their choice on what is available on a platform than the name of the platform. When the consumer is the focus, companies considered rivals are finding ways to work together. I think we’re going to see more of that.”