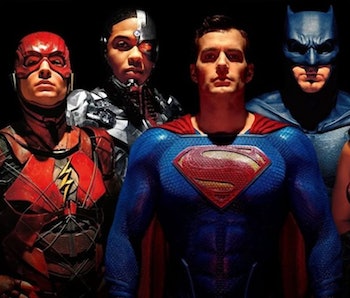 The Snyder Cut — Zack Snyder’s original vision of 2017’s Justice League — will debut next year on HBO Max. Snyder’s film will surpass the film’s original runtime of two hours, with this new version potentially clocking in at nearly four hours long. That leaves plenty of room for unseen footage, deleted scenes, and underdeveloped characters to make their way back into the movie.

That includes Cyborg’s discarded story arc. The beloved character, aka Victor Stone, was first introduced in Batman v Superman: Dawn of Justice and it made sense to develop his story further in Justice League. Instead, Cyborg’s role was reduced. The Snyder Cut may finally give fans the Cyborg story we needed all along.

Ray Fisher, who plays Cyborg, has always been a staunch supporter of the Snyder Cut. The actor praised the director on Twitter for allowing him input on Victor’s storyline. Fisher added a photo from an unreleased Justice League scene depicting Cyborg turning to look at himself, standing alongside his parents, presumably before his accident. The image is in black and white, though it’s unclear if the scene is a memory or a flashback.

The image Fisher shared isn’t new, but it suggests the Snyder Cut includes more details of Cyborg’s origin story and family dynamics. Fisher knows that there’s a lot more to Cyborg than in the 2017 cut of Justice League and the new version of the film may finally give fans what they’ve long craved to see.

In the comics, Cyborg’s parents, Silas and Elinore Stone, were scientists who subjected him to experiments that enhanced his intelligence. A lab incident saw Cyborg attacked by an inter-dimensional creature that killed his mother and left him near death. To save his son, Silas implanted several artificial limbs that included weapons systems and other cybernetic enhancement technology that turned him into a half-man, half-machine.

Fisher's recent tweet suggests Cyborg will feature more prominently in the Synder Cut. After all, Cyborg was not only meant to appear in Justice League, but he was originally supposed to play a role in the solo The Flash movie. What’s more, Justice League would have helped launch Cyborg’s own solo movie, which was originally slated for release on April 3.

Back in 2018, Joe Morton, who was cast as Cyborg’s dad, said many of his scenes for Justice League were cut. This was also back when a solo Cyborg film was still on the table. Here’s what Morton told /Film:

“There was [more we shot]. They completely changed the story. Unfortunately, I can’t tell you what [the original story] is because that might end up being in part of the Cyborg movie. Yes, there was a big change once they decided that they were going to do the Cyborg film.”

It’s possible some or all of these Cyborg scenes will make their way back into the Snyder Cut, which could then segue quite nicely into a solo film. That is, if Warner Bros. is still up for it. In any case, it leaves the door open for more Cyborg appearances in the DCEU.