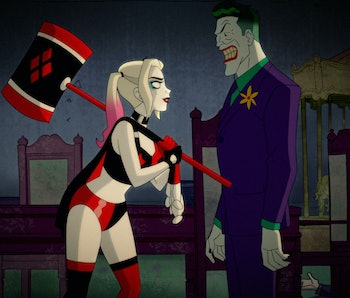 Harley Quinn, the ambitious, R-rated animated comedy airing on DC Universe, is taking shots at Snyder Cut dudebros, effectively breaking the fourth wall in the series's most meta moment yet.

A clip released by DC Universe sees a Snyder Cut fanboy — he’s wearing a “Release the Snyder Cut” T-shirt for good measure, just in case the joke’s target wasn’t clear — complaining to his friend about being forced to watch Harley Quinn. After all, the show is only for “12-year-old girls,” right? Apparently, the dudebro just couldn’t fathom having to watch a series that is set in Gotham City, but rarely ever features Batman as a main character.

His friend, a Star Wars fan sporting an anti-Last Jedi shirt, claims the Snyder Cut fan has watched “all five seasons of Gotham” even though they didn’t include Batman until the very end. Naturally, there’s a lot of cringe-worthy commentary typically associated with dudebro fans when discussing women in the clip.

For example, the Synder Cut stan argues Harley Quinn features a “tsunami of virtue-signaling,” and says he was offended that Harley could beat villains with her “Mary Sue powers,” a phrase often used to undermine the abilities of women characters. Funnily enough, the fanboy clearly knows the details about the plot of Season 2, despite his dripping disdain for the female-focused show.

Granted, when the fanboy finally reads the summary of Season 2’s fifth episode, called “Batman’s Back Man,” he’s surprised that the episode of Harley Quinn will focus on Batman. The parody clip simultaneously roasts the cringier tendencies of dudebro fan culture while promoting the animated series and the DC Universe streaming service. You can watch the full clip below.

Harley Quinn, which takes place after her split from the Joker, hasn’t shied away from scathing commentary and debatable topics, such as whether or not Poison Ivy is actually a criminal mastermind or a misunderstood eco-terrorist.

Really, what’s the point of fan culture if no one pokes fun at it from time to time? Personally, the clip is a prime example of how dudebro fandoms make it hard for women to exist in fan spaces, as these kinds of fans are usually the first on the frontlines in their targeted hatred of certain properties, be it Birds of Prey, Wonder Woman, or The Last Jedi.

What’s more, the clip seems to imply that Star Wars fans who hated The Last Jedi with a fiery passion may be just as bad as Snyder Cut fanboys. However, notice that it's the Star Wars fanboy who is the logical one, seemingly removed from the heated anger of the Snyder Cut fan. It’s likely that the conversation would play out differently if the tables were turned, but the argument here seems to be that Snyder Cut stans are even more insufferable than aggrieved Star Wars fanboys.

Predictably, a few commenters in the Twitter thread are already disparaging the Harley Quinn clip by claiming that it's an unfair depiction of Snyder Cut evangelists that will alienate fans. However, most seem to be taking it in the playful spirit in which it was intended. Either way, the meta moment is good for a laugh.