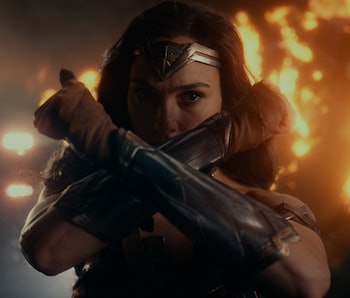 Among other things that make filmmaking a complicated endeavor, movies regularly shoot more footage than they'll ever actually use. Whether it's a hard-hitting documentary or a big-budget superhero movie, there will be material that will never see the light of day. Case in point: Actress Connie Nielsen just revealed an entire action scene she prepared and filmed that was left off the final cut of the 2017 DC superhero movie, Justice League.

You know what that means: It's "Snyder Cut" time, baby.

In an interview with ComingSoon.net, Nielsen, who played the Amazonian ruler Hippolyta, revealed her "absolute favorite stunt" that was left out of the theatrical cut of Justice League. "I'm having a hard time accepting that [it was not used], it was so cool," she said.

As Nielsen describes it, the stunt involved Nielsen's Hippolyta running up a wall and spearing monsters in mid-air.

"I got to run up a wall and pivot in the air, and as I pivoted on my way down I speared one of the monsters," Nielsen said. "I literally did that for weeks to get that, and then they didn't put it in. They took it out, they put it in, they took it out. It's my great regret because I love stunts, I love being a badass in a film like that, and then sorry that the audience didn't get to see that part of the cool Amazon fighting techniques."

She added, "They were very cool."

By now, you must be familiar with the "Snyder Cut." For the few who need to be brought up to speed, the making of the 2017 movie Justice League saw the exit of director Zack Snyder due to a personal tragedy. Joss Whedon — director of The Avengers and creator of cult TV shows like Buffy the Vampire Slayer and Firefly who was brought in to doctor the script — replaced Snyder to finish principal photography just months before the film's theatrical release.

While it's hard to tell from the outside whose material belongs to whom, both Snyder and Whedon have differing sensibilities as artists that fans, and many critics, thought clashed in the final product. The film's run time was also cut down significantly.

In the years since, details emerged over what fans call the "Snyder Cut," a longer version of the film that retains Snyder's baroque tone. Fans who prefer Snyder's aesthetics have since campaigned for Warner Bros. to "release the Snyder Cut," though the studio has not officially responded to their efforts. For what it's worth, the stars of Justice League, including even Ben Affleck, have also supported the release of the Snyder Cut.

We don't know whether Nielsen's stunt in Justice League is part of the "Snyder Cut" — her humorous description of the scene being in and out repeatedly suggests it might — but it is further proof that somewhere on this planet exists a version of a superhero movie that fans just can't stop thinking about.

There are no known plans for a release of the "Snyder Cut."