‘Snake Eyes’ star and producer tease what’s next for G.I. Joe hero in a sequel

“He chooses his words wisely.” 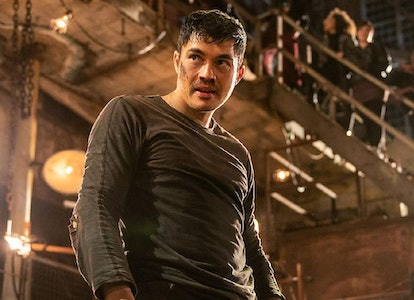 Snake Eyes is back on the big screen, with the G.I. Joe commando leading his own reboot and Henry Golding suiting up to play him. As fans have been quick to point out, the star of Crazy Rich Asians isn’t the Snake Eyes they’re familiar with — mainly because Golding isn’t exactly the strong-and-silent type.

But should the newly-resurrected G.I. Joe franchise continue on from Snake Eyes, Golding and producer Lorenzo di Bonaventura confirm the character of Snake Eyes will eventually evolve into the mute, mysterious ninja fans know and love.

In Snake Eyes: G.I. Joe Origins, now in theaters, Golding’s titular protagonist is able to speak and manages to keep his handsome features intact (a few black eyes and bloody noses notwithstanding). That’s unlike the Snake Eyes who appears in the G.I. Joe comics by the legendary Larry Hama, who imagined Snake Eyes as a mute mercenary whose face was horrifically burned on an early mission (revealed in G.I. Joe: A Real American Hero #144, published in January 1994).

In a featurette previously released by the producers of Snake Eyes, di Bonaventura said the intention was to do an origin story of Snake Eyes “before he’s lost his voice.”

“That opened up a world of opportunity,” the producer said.

During a longer conversation with Inverse, Golding expanded on what kind of character Snake Eyes becomes when he does open his mouth. And both he and di Bonaventura have maintained that Snake Eyes will indeed lose his voice in a future G.I. Joe sequel.

“I think he chooses when to use his voice,” Golding tells Inverse. “He’s not the most talkative. He’s not the one laying out all his cards. He’s a man of action.”

Golding takes over the role of Snake Eyes from Ray Park (whose masked version of the character appeared in both 2009’s G.I. Joe: The Rise of Cobra and 2013’s G.I. Joe: Retaliation). And the actor offers that his take on the character is “suffering” due to “struggling with his identity.”

“He’s made some bad decisions, and he has to keep secret,” says Golding, who maintains that Snake Eyes is a far cry from another masked mercenary: Marvel antihero Deadpool.

“The more he talks, the more possibility [there is] he’s going to spill secrets to the wrong people. So he keeps everything under the hood. It’s a great way of finding the balance, of not making him the Merc with the Mouth. He is the stoic warrior, and he chooses his words wisely to get more information or what he wants.”

Snake Eyes speaks in this movie, but fans shouldn’t expect the character to be this talkative forever.

Lorenzo di Bonaventura, who produces the Transformers and G.I. Joe franchises, has a direct answer for Inverse on this front. “If we are successful enough to get one or more sequels,” he says, “I would assume we will eventually get to the point where his character no longer speaks.”

Golding, for one, loves the idea.

“Will it stay gone? Or [do] we have some sort of synthesizer, and he uses his voice when absolutely necessary?” Golding wonders aloud. It’s not like Snake Eyes has always been quiet. In G.I. Joe #102, Snake cried out to his beloved Scarlett (played by Samara Weaving in Snake Eyes) as both were recovering from severe injuries.

“Why limit it?” says Golding. “[It] is crazy to watch back the movies and see this sort of mime-like movement when the guy’s a badass. He needs to say one or two words and meet them with venom. We should have flexibility. I love the idea of something happening to his voice.”

That said, Golding adds that the G.I. Joe organization is more than capable of communicating with Snake Eyes if they so choose to. “They have a lot of tech,” he says. “We can figure it out.”

More like this
Entertainment
6.14.2022 4:50 PM
A Joker 2 musical would actually be great — here’s why
By Dais Johnston
Entertainment
6.23.2022 11:30 AM
15 years ago, Bruce Willis made his most preposterous action thriller ever
By Vance Osteen
Entertainment
6.12.2022 2:30 PM
Robert Eggers still can't believe Hollywood let him make 'The Northman'
By Eric Francisco
Related Tags
Share: