“You see the precipice of that universe.” 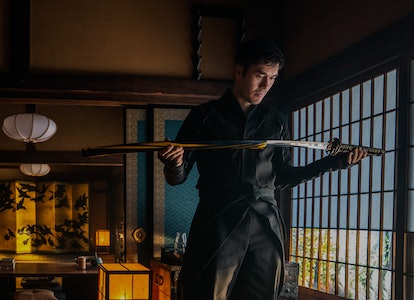 Henry Golding is reporting for duty. On Sunday during the MTV Movie Awards, Paramount Pictures released the first trailer for Snake Eyes: G.I. Joe Origins, a new prequel/reboot to the G.I. Joe film franchise from director Robert Schwentke. The film, which opens in theaters on July 23, stars Golding as the title character, a ninja from the Arashikage clan in his growth to become the Snake Eyes that G.I. Joe fans know and love.

In an interview, Golding tells Inverse that Snake Eyes is a fresh start for G.I. Joe on the big screen. It’s through the character’s origin story that allows audiences to take their first steps into a new G.I. Joe cinematic universe.

“We’re starting from the ground up,” Golding says. “We’re cutting the cords of the history of what we know so far on the big screen. This character is going to be the kick-off, the one who is going to light the fuse for the rest of the movies.”

Golding, who starred in the 2018 rom-com blockbuster Crazy Rich Asians, takes over the role from Ray Park who played Snake Eyes in G.I. Joe: The Rise of Cobra (2009) and G.I. Joe: Retaliation (2013). Though Snake Eyes emerges at a time when Marvel and DC superheroes dominate Hollywood, Golding says Snake Eyes isn’t a superhero movie, but a martial arts movie.

“We’re so much more grounded in reality.”

“The last thing I wanted to do was add to the pile of superhero movies we’ve been seeing,” Golding says. “It’s time to have a fresh new look on something like this. It’s not a superhero movie. We’re an action movie through and through. We’re martial arts. We’re so much more grounded in reality.”

As the origin story of Snake Eyes, the movie details how the character — whose real name is still classified in G.I. Joe canon — becomes one of the team’s most valued operatives.

“Snake Eyes and Storm Shadow have gone through the gauntlet to be who they are,” Golding says. “They’re not born with superpowers. They haven’t woken up one day bitten by a radioactive rabbit or whatever. These guys went through the sewer, the lowest of the low, to become who they are. That’s the story we wanted to tell. Where did this guy come from? What lessons did he learn? What choices did he make? Why did he don the mask? And who gave it to him?”

Unlike most versions of Snake Eyes in G.I. Joe media, Golding’s character does speak. For now.

“Everybody knows who Snake Eyes is to an extent,” Golding adds. “But they don’t know the guy behind the mask, the responsibility to uphold his ethos. We get to understand who he is as a human being. His sacrifices and lessons he’s learned, the choices he’s made to become this title character.”

What’s compelling about Snake Eyes is that Golding, a half-Malaysian, half-British actor who is one of Hollywood’s few leading actors of Asian descent, is playing a role that has been canonically a white male. In the original G.I. Joe comics by Larry Hama, who is credited as an executive producer on the film, Snake Eyes was an “outsider” to the Japanese Arashikage clan. Golding says 2021’s Snake Eyes is an opportunity to tell Hama’s original story about outsiders and acceptance in a way the comic book legend has always wanted to tell it.

“He gave us license to co-create with him the backstory he always wanted to tell,” Golding says. “People are like, ‘That’s not his history. He’s meant to be white.’ Well, maybe Larry had to do that. Maybe Larry had to make an obvious fish out of water. He had to make him white with blonde hair and blue eyes.”

Snake Eyes is still a story about outsiders, now told through the lens of the Asian diaspora who are raised outside their ethnic origins. “It gave us the ability to start over with the blessing of Larry Hama,” Golding says. “Nowadays, we’re all fish out of water.”

Golding adds that the new one-minute trailer only shows “like six percent of what we shot.”

“You see the precipice of that universe,” the actor says. “We wanted to macro-zoom on a particular character that was so important to the G.I. Joe universe. To give that character justice in building his history before making the ensemble. We see Baronness, we see Scarlett, we see Storm Shadow, and a host of others. This sets the tone for where this is heading. It’s new and fresh, and something people are hungry for. We can go anywhere.”

More like this
Entertainment
8.6.2022 12:00 PM
The real stars of Bullet Train deserved better
By Eric Francisco
Culture
8.16.2022 11:30 AM
25 years ago, Shaquille O'Neal made the worst superhero movie of all time
By Laura Kelly
Culture
8.2.2022 11:30 AM
You need to watch the greatest Marvel movie ever on Netflix ASAP
By Alex Welch
Related Tags
Share: