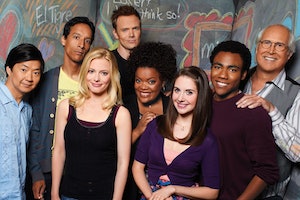 series for fans of genre-bending laughs

Shows like 'Community': 6 smart, snappy meta-comedies worth the binge

Community's arrival on Netflix spurred many people to start rewatches of its six seasons of meta-comedy and genre-hopping, but all good things must come to an end. Looking for something similar to fill the void? There's a few well-known and underappreciated shows out there that blur the lines between genres and reality itself. Here are six shows to get you started.

This Adult Swim phenomenon takes all the deconstructive and self-referential jokes from Community and transplants them into an animated world, where they easily take root due to the fantastical nature of the medium. While Community took Harmon's off-the-wall sense of humor and forced it into a sitcom setting, Rick and Morty allows for impossible events and truly showcases every facet of Harmon's strange thinking.

One of Harmon's lesser-known forays into animation was the hybrid series Harmonquest, where he plays DnD with his friends. As they build their story, animated sequences depict all the role-playing.

A celebrity guest takes on a one-shot role in each episode as they navigate through different fantasy obstacles, including Ron Funches as a pirate captain, Aubrey Plaza as a gnome alchemist, and Nathan Fillion as an Elf King. At their core, fantasy role-playing games are exercises in improvisation, so bringing on renowned improv comedians like Paul F. Tompkins and Thomas Middleditch ensures hilarious and thrilling gameplay.

He poses as a business consultant who graduated from business school with "really good grades" and offers his assistance to local businesses, only for those plans to backfire or just... not work, like a plan to develop a moving service with free labor by claiming it's a new health craze.

The best episodes of Nathan for You are the specials dedicated to one elaborate scheme, such as "Finding Frances," a 90-minute saga following Nathan's friend, a Bill Gates impersonator, as he seeks out his long lost love. It's honestly a great TV movie on its own merits.

3. It's Always Sunny in Philadelphia

It's Always Sunny in Philadelphia recently got renewed for a 15th season, priming it to become the longest-running live-action comedy series on television. With all that content to wade through, it's the perfect binge.

While some episodes are just classic comedy hijinks, other episodes get a little meta, a little topical, or completely parody, like their episodes on Lethal Weapon, Invincible, and in one of the most ambitious works of television in recent years, "Charlie Work," parodying Birdman with long, complex tracking shots that will have you enthralled.

Almost Royal takes the reality-blurring docuseries format up a level, starring fantastic improv comedians Ed Gamble and Amy Hoggart as Georgie and Poppy Carlton. These minor aristocrats are 98th and 99th in line for the British throne, and the show follows the duo as they explore America on a mission from their late departed father.

During their journey, they encounter different facets of American society who may or may not know they're joking. It forces you to look at American culture through the eyes of some outrageously pompous fictional Brits. Think of it like Borat, but far more posh and polite.

Available on: HBO Max and Amazon

Edgar Wright, director of Shaun of the Dead and Hot Fuzz, got his start with this early 2000s sitcom. His his distinct style of pop culture references and parody permeates deep into it.

Spaced follows Tim and Daisy, two strangers who pose as a couple in order to rent a flat on the cheap, though that premise doesn't play a huge role over the course of the show. Instead, episodes throw references willy-nilly to shows like Scooby Doo and Buffy the Vampire Slayer, and a dog shelter break-in episode provides a spot on parody of heist movies. Starring Simon Pegg with appearances from, well, basically everyone from Edgar Wright's movies, this is a must for any pop culture lover.