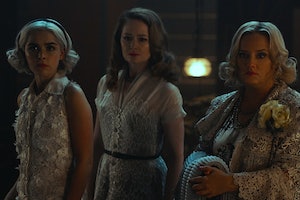 Shows for fans of occult chills

Shows like 'Chilling Adventures of Sabrina': 11 spooky thrillers to stream in quarantine

It was only a couple months ago that fans were settling in to watch Sabrina Spellman defend her hellish throne in Season 3 of Chilling Adventures of Sabrina. Now that everyone is stuck at home for the foreseeable future, there's plenty of time to binge the supernatural comedies and dramas you've been meaning to watch.

If you enjoyed Chilling Adventures of Sabrina’s witchy ways, supernatural drama, and all things having to do with hell, then you may like these 11 series just as much.

For fans who liked: Teen drama with a dash of gore and mystery.

Based on the characters from Archie Comics, Riverdale shares a universe with Netflix’s Chilling Adventures of Sabrina. Though the timelines have never been confirmed, there are plenty of Easter eggs referencing Greendale’s neighboring town. Riverdale starts off with a chilling mystery and a healthy dose of teen drama. Much like Sabrina and her crew, Betty, Archie, Jughead, and Veronica work together to figure out the season’s mystery amid family quarrels, jail time, putting on school musicals, and cheerleading practice.

The series is unabashedly ludicrous and intertwines soap opera tropes with horror and mystery. Riverdale will easily get you hooked and bingeing the series will be a breeze.

For fans who liked: All the demons, monsters, and pagan and Christian mythology.

Supernatural is that show we've all heard of and never got around to watching. Its 15-season run begins as Sam and Dean Winchester’s father goes missing in search of the Yellow-Eyed Demon, the mysterious figure who killed their mother when Sam was a baby. Later on, they learn the demon had quite an intricate plan for the brothers.

Beyond the main plot, Sam and Dean have weekly adventures hunting changelings, shapeshifters, shtrigas, werewolves, hellhounds, jinns, archangels, and yes, even vampires. Supernatural is chock-full of mythology, bouts of horror, and heartfelt rumination. But the series isn’t all drama and death. There is plenty of comedy (and sarcasm), too, including several episodes that break the fourth wall and one that even parodies Grey’s Anatomy.

For fans who liked: Everything about Chilling Adventures of Sabrina

Buffy the Vampire Slayer was the Chilling Adventures of Sabrina of the late ‘90s. The series was a staple on The WB before being picked up by UPN for its last two seasons. While it's been off the air for 17 years, Buffy and her friends have become the stuff of legends, paving the way for shows like Sabrina.

Based on the 1992 movie of the same name, Buffy the Vampire Slayer follows Buffy Summers (Sarah Michelle Gellar) as one of the “Chosen Ones” in a long line of slayers fated to protect humanity from vampires and demons. Like Sabrina, she’s initially against the idea of being anything but a normal teenager, fighting against her destiny as a slayer at every turn, usually with a hefty amount of wit and sarcasm. Buffy eventually comes to terms with her role and the show weaves together intricate storylines with clever ease.

For fans who liked: Magical creatures, time travel, and hell.

DC’s Legends of Tomorrow is one of zaniest shows out there. Setting itself apart from the rest of the superhero shows that make up The CW’s Arrowverse, Legends follows a team of time travelers whose mission is to avoid disruptions to the timestream. That sounds simple enough, except that the Legends are usually the ones accidentally throwing the timeline into chaos. That sounds like a certain Spellman witch we know. Seasons 3 and 4 introduced magical creatures, witchcraft, exorcisms, and hell.

Much like Chilling Adventures of Sabrina, Legends plays fast and loose with mythology while also creating its own. The characters are constantly coming up with outrageous ways to contain historical figures, which most recently included Rasputin and Marie Antoinette. It's the perfect combination of time travel and mythos, wrapped in a charming presentation.

For fans who liked: Demons, hell, and moral lessons.

The Good Place doesn’t exactly inspire many direct similarities to Chilling Adventures of Sabrina, but what it lacks in supernatural horror, it makes up for everywhere else.

Inspired by the philosophical teachings of Immanuel Kant, René Descarte, and John Locke, The Good Place follows the lives (and after-lives) of Eleanor (Kristin Bell), Chidi (William Jackson Harper), Tahani (Jameela Jamil), and Jason (Manny Jacinto). After dying, they’re tricked into thinking that they’ve ended up in the Good Place after living great, morally sound lives. Before long, they discover that they’re actually in the Bad Place and, along with the demon Michael (Ted Danson) and the resourceful Janet (D’Arcy Carden), concoct a plan to overthrow the afterlife’s system for good.

The Good Place is the poster child for second chances. The sitcom explores the idea of death and the afterlife, what it means to be a good person, and poses ethical and moral questions with surprising thoughtfulness.

For fans who liked: The supernatural, moral lessons, and mythological creatures.

This BBC drama series finds a clever way to depict a werewolf, ghost, and vampire trying to live regular lives in Bristol, England. The series begins with werewolf George and vampire John before they eventually move in with Annie, the ghost haunting their new home. Despite the premise, Being Human isn’t at all a gimmicky show, but a deeply allegorical one that depicts George’s struggles with being a vampire like that of an addict and John being a werewolf-like an internal conflict.

The show went on for five seasons, with several new characters introduced in the final two seasons. However, the first three seasons of the show are considered by many to be the best of the series. Being Human became popular enough that it spawned a Canadian adaptation, but it’s arguably not as good as the original. Much like the witch’s coven on Sabrina must hide who they really are from the general public, so do the characters on this exceptional BBC show.

Where to stream: Amazon Prime

For fans who liked: Hell. Lots and lots of hell.

If you’re thinking that Lucifer is a run-of-the-mill story about the devil, then you’re in for a fun surprise because the series manages to subvert most of the stereotypes associated with the former archangel.

Canceled by Fox after three seasons before being picked up by Netflix, Lucifer follows the former ruler of Hell (Tom Ellis) as he makes a new life for himself in Los Angeles as a nightclub owner and police consultant. Yes, it’s wild. Lucifer is ever the charmer, and one of the best parts of the show is watching him grow into his new life. As a fun aside, Ellis recently appeared in The CW’s Arrowverse crossover, confirming that Lucifer is a part of the multiverse and lived on Earth-666.

For fans who liked: Moody teenagers coping with their powers and saving the world.

Based on a graphic novel series, Netflix’s The Umbrella Academy follows the Hargreeves, a dysfunctional adopted family who all have unique powers and abilities, such as time travel. Though they’ve lived separately for a while, the siblings are reunited after their father’s death. Naturally, there’s a mystery to be solved and a looming apocalypse to prevent.

If the plot sounds familiar, that’s because it shares a lot of obvious similarities to Chilling Adventures of Sabrina’s third season. Like the Spellmans, the Hargreeves must contend with keeping their family together in turbulent times. All that plus world-ending theatrics and time travel as a means to help save the world are all the more reason to watch The Umbrella Academy.

3. The Haunting of Hill House

For fans who liked: The supernatural horror.

The Haunting of Hill House has a lot of the same horror elements as Sabrina, but it involves a lot more ghosts of course. Set in two different, but connected, storylines, the series tells the story of five siblings whose experiences at the Hill House mansion follow them through adulthood.

The anthology series’ first season is based on the short story by Shirley Jackson and the series is able to provide the chills and thrills of a good ghost story that effectively explores the psychological impact on its characters. Season 2 isn’t out yet, but it’s expected to premiere later this year.

For fans who liked: Demons, wittiness, and twisted stories.

Based on the novel by Terry Pratchett and Neil Gaiman, Good Omens is a six-episode miniseries that follows a bizarre and unprecedented friendship between the angel Aziraphale (Michael Sheen) and the demon Crowley (David Tennant). Having spent an inordinate amount of time on Earth, the two friends make plans to stop the Antichrist from wreaking destruction and bringing about the apocalypse. So, they decide that if they influence this kid’s life, he’ll grow up to be pretty normal. However, they fail to realize they’ve got the wrong child.

Good Omens is a fun take on doomsday, striking a balance between humor and apocalyptic drama. "An angel and a demon walk into the Ritz" sounds like the start of a bad joke, but the unique friendship between Crowley and Aziraphale carries the series.

For fans who liked: Witch and wizarding school, magic, mythology

The Magicians starts off a lot like Harry Potter. Quentin (Jason Ralph) really wanted to study magic at Brakebills University, the fictional magic school from the Fillory and Further book series. Before long, he discovers that Fillory is actually a real place and there's a creature lurking there that poses a threat to the entire world. He and his friends end up venturing there and are thrown into a far more complicated situation than they'd ever imagine.

The series is dark, full of horror and gore, and explores what it means to be the hero of your own story. The Syfy series gets away with a lot of heavy and mature elements, and there's also a hefty dose of sarcastic humor. The Magicians excels at bringing magic to life with its own mythology and world-building.