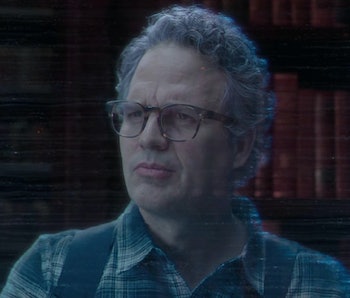 She-Hulk may prove to be more important than comic book fans think. The Disney+ series is set to bring Tatiana Maslany’s Jennifer Walters into the Marvel Cinematic Universe, and will see her working with Mark Ruffalo’s Bruce Banner to learn to control her newfound Hulk powers. A legal comedy, it promises to be one of Marvel’s more eccentric 2022 titles.

However, She-Hulk’s importance may extend past its introduction of Walters. Several new Marvel leaks suggest it could lead directly into the plot of one rumored MCU project.

Back to Sakaar — This week, Marvel leaker @MyTimeToShineHello made waves when they tweeted that Mark Ruffalo’s Bruce Banner will leave Earth again at the end of She-Hulk. In case that wasn’t exciting enough, fellow Marvel insider KC Walsh responded to the tweet by suggesting that Bruce’s voyage is a “father and son round trip to get help.”

Walsh’s tweet lines up with another She-Hulk leak, which began circulating in late 2021 and claims that the series will introduce Hulk’s son, Skaar, into the MCU. Assuming these leaks are all correct, what causes Bruce to go get his son at the end of She-Hulk, and what will come of his decision to do so?

World War Hulk in the MCU — In the comics, Skaar is the child of Hulk and Caiera the Oldstrong, a member of the Sakaaran Shadow People who the Hulk meets and marries while ruling over the planet Sakaar. Skaar has essentially all the same powers as his father and is capable of assuming a human form, though he transforms back into his green self whenever he becomes too angry. Like his father, he alternates between being a stubborn rage tyrant and a powerful superhero.

Skaar also grew up in a brutal environment, which means he may have a very different outlook on life when Mark Ruffalo’s Bruce Banner comes to find him after She-Hulk. Is it possible, for instance, that Skaar could attempt to challenge his father’s status as one of the galaxy’s mightiest warriors? It’s hard to know, but considering that Marvel is rumored to be developing a World War Hulk film, there’s certainly the chance that Skaar and Bruce’s meeting won’t be entirely amicable.

Additionally, it’s worth noting that She-Hulk is rumored to introduce multiple new Hulk-like characters in the MCU, including Thunderbolt Ross (William Hurt) as Red Hulk. If that’s the case, then it’s entirely possible She-Hulk will end with Bruce going into space to find his son in the hopes of procuring Skaar’s help in his fight against all the new, bad Hulks that have begun to run rampant on Earth.

That would make sense, especially considering that the original World War Hulk storyline centers on an Earth-set conflict between an enraged Hulk and the planet’s mightiest heroes.

But assuming the company is, that means She-Hulk will almost certainly set it up somehow. If these two new leaks are to be believed, it seems likely that the series will do so by sending Bruce on another cosmic journey, one that involves his son.

For now, all we can do now is speculate about what the full scope of that journey may be.

She-Hulk will premiere on Disney+ sometime in 2022.