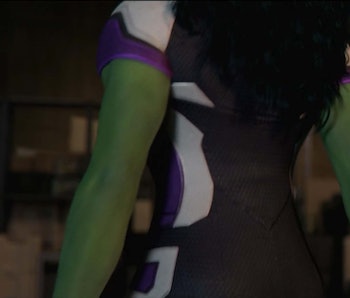 Smashing her way onto our television sets soon is She-Hulk, the new Disney+ series starring Orphan Black’s Tatiana Maslany. After Marvel Studios announced it was giving the green heroine her own live-action show back in 2019, fans have been eagerly anticipating her debut on the streaming platform.

Created by Jessica Gao (best known for her work on Rick & Morty), She-Hulk will follow Jennifer Walters (Maslany), a “normal lawyer” who also happens to transform into a large, powerful green version of herself, much like Bruce Banner (Mark Ruffalo).

Expected to be part superhero show and part courtroom drama, She-Hulk is directed by Kat Coiro (Brooklyn Nine-Nine) and Anu Valia (Never Have I Ever). As part of Disney+ Day 2021, Marvel revealed a new title card and exciting footage from the She-Hulk series. Here’s what you need to know.

Disney+ Day, which took place on November 12, unveiled new shows, trailers, and other major announcements to celebrate the streaming platform’s second anniversary. Part of that was releasing a special on Disney+ from Marvel Studios.

The studio revealed new details about several highly anticipated projects, including She-Hulk. While it didn’t provide an official release date, the special revealed about 15 seconds of footage, primarily featuring Maslany as Jennifer Walters and Ruffalo in Smart Hulk form.

We only get a glimpse of Walters as She-Hulk, as the footage holds back on showing the green superhero completely. What we do see is Jennifer going about her day, doing yoga, walking to her job in a suit, and working with Smart Hulk.

One scene shows Smart Hulk performing some kind of test on Jennifer. He explains to her that “these transformations are triggered by anger and fear.” It seems like he’ll be showing her the ropes in terms of how to control She-Hulk. This differs slightly from recent rumors and leaks that the series would see Jennifer helping Banner/Hulk control his transformation issues, though perhaps this is a more mutual dynamic than the first look indicates.

The footage also doesn’t explain how Jennifer becomes She-Hulk. The character, which debuted in Marvel Comics in 1980, became She-Hulk on the page after being shot by a crime boss and receiving a blood transfusion from Banner/Hulk. However, also in the comics, Walters’ Hulk differs signficantly from Banner’s green alter-ego. Jennifer learns that she can control her transformation into She-Hulk, whereas Banner notoriously is unable to control it.

It will be fascinating to see how the series departs from the comics and explores the dynamic between these two green giants onscreen. If this new footage is any indication, She-Hulk is bound to be a lot of fun, leaning into its comedic source material. Another moment from She-Hulk’s footage shows what seems to be a retro lawyer commercial, in which the two main characters sport ‘70s attire.

Jennifer says, “Don’t make me angry,” before turning directly to the camera and saying, “You wouldn’t like me when I’m angry.”

While it’s unclear how this particular scene fits into the show, it could directly reference the ‘70s series. It could also operate as part of a fantasy sequence, similar to the commercials in WandaVision. It wouldn’t be the first time Marvel added magical realism to their shows, and She-Hulk indeed seems like a good fit for that narrative device.

While She-Hulk’s new footage only teased two cast members, the show will include other new and familiar characters. Actors Ginger Gonzaga, Renée Elise Goldsberry, and Jameela Jamil are part of the cast. Gonzaga will play Walters’ best friend, and Goldsberry is set to play a mysterious character named Amelia. Jamil has been confirmed in the role of Titania, the show’s villain and a rival to She-Hulk.

As for familiar faces, Ruffalo’s Bruce Banner appears in the Disney+ series, and the footage seems to suggest the size of Banner’s role is rather significant. Tim Roth will return to play Emil Blonsky, aka Abomination (who made a CGI cameo recently in Shang-Chi). And Charlie Cox’s Daredevil is also rumored to make an appearance, likely in the form of lawyer Matt Murdock.

Although we only received a tiny glimpse of She-Hulk for Disney+ Day, the 15 seconds of footage packed a Hulk-sized punch and is sure to hold fans over until the show’s debut.