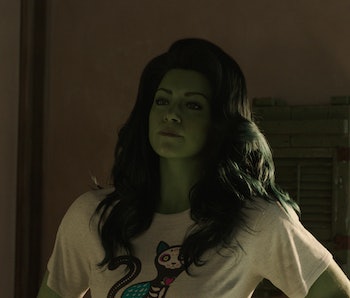 But there’s a critical and crucial difference between Jennifer and her more famous blood relative. For Bruce, it took years of study, testing, meditation, and patience to merge his human ego with the unstoppable Hulk. For Jennifer, it took no time at all.

To Bruce’s surprise, Jennifer can keep her normal human ego intact with no monstrous personality threatening to take over the wheel. But how? Why? As always, the original comics provide a glimpse into how the Marvel Cinematic Universe is operating with its lore.

How Jennifer Walters became She-Hulk (in the comics)

Before we talk comics: Did you know She-Hulk became a thing in comics because of TV?

In the late 1970s, the TV series The Incredible Hulk, which famously starred bodybuilder Lou Ferrigno, was a smash hit. Unlike Marvel’s control over its TV adaptations today, The Incredible Hulk was licensed and managed by a team of producers separate from Marvel.

The producers of The Incredible Hulk also made the popular Six Million Dollar Man franchise, which had the spin-off The Bionic Woman starring a female counterpart to Steve Austin. Fearing the show would follow suit and create a female Hulk, Marvel published its own “She-Hulk” in comics, so that if the TV series ever wanted her, Marvel would still own the rights. She-Hulk would also be the last Marvel hero created by Stan Lee until 1992.

Anyway, Jennifer debuted in The Savage She-Hulk #1, published in November 1979. In her original origin story, she was the daughter of an L.A. country sheriff who was the target of a deadly mob hit. With Jennifer fatally wounded, her cousin Bruce steps in and gives her a blood transfusion in an effort to save her. But because Bruce’s blood is infected with gamma radiation, Jennifer receives some of the same stuff that turns Bruce into the Hulk.

However, Jennifer doesn’t receive as much radiation as Bruce did when he became the Hulk, so she only physically transforms into a Hulk. Even while Hulking out, she’s able to retain her human ego, including her intelligence. She’s also canonically not as strong as her cousin, and she’s not typically seen as a monster, per se, but an Amazon-like goddess. This has consequently allowed Jennifer to operate as a lawyer, often in her She-Hulk form.

This changed pretty recently. During comic writer Jason Aaron’s Avengers, which began in 2018, She-Hulk underwent a transformation that gave her a bigger physique and a monstrous personality. Aaron’s version was unpopular among fans who believed She-Hulk had been made into a paler copy of her cousin, and her old form was eventually “restored” in Avengers #50, published last December.

The Marvel Cinematic Universe obviously makes a few changes to Jennifer’s story, such as pivoting from the mafia origin to emphasize the cosmic elements of the MCU. (It’s also likely setting up something very interesting in Phase 6.) The transfusion of blood is also more of an accident. Jennifer accidentally gets some of Bruce’s blood in her wounds, rather than Bruce willingly giving her blood to ensure her survival. This still explains why Jennifer only has partial exposure to gamma radiation and is still able to stay herself when she’s “Hulked out.”

On the show, Bruce verbally admits to Jennifer that there is a lot he doesn’t know about his Hulk form. “Unprecedented territory” is spoken at least twice by Bruce while helping Jennifer. This leaves a lot of room for the MCU to make more changes from the comics, which have been able to explore the depths of gamma radiation more than Marvel’s TV and movies.

With an emphasis on humor and an exploration of modern womanhood using superhero metaphors, it’s unlikely She-Hulk: Attorney At Law will go any further to explore the minutiae of Jennifer’s transformation. Still, even in a lighthearted sitcom about workplace politics and dating apps, the open-ended nature of the MCU means She-Hulk could surprise us with even more things to learn. Just maybe not until after happy hour.