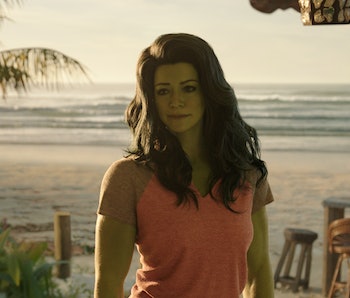 In less than a week, comic book fans are going to meet the Marvel Cinematic Universe’s newest superhero in She-Hulk: Attorney at Law.

The Disney+ series will introduce MCU viewers to Jennifer Walters (Tatiana Maslany), a formidable lawyer who just so happens to be Bruce Banner’s (Mark Ruffalo) cousin. She-Hulk will follow the character as she struggles to come to terms with the new, Hulk-like powers she receives during a car accident involving both her and her Avenger cousin.

However, while She-Hulk is going to focus primarily on Maslany’s Jennifer, the series will also put the spotlight back on Ruffalo’s Bruce Banner for the first time since 2019’s Avengers: Endgame. As a matter of fact, it looks like one of Bruce’s previous MCU adventures may even be the cause of everything that happens in She-Hulk: Attorney at Law.

An Alien Ambush — In anticipation of She-Hulk’s premiere next week, IMDb shared a new clip from the series Thursday morning on Twitter. The clip in question, which runs around a minute long, shows Maslany’s Jennifer and Ruffalo’s Bruce arguing about whether or not Steve Rogers was a virgin before he traveled back in time (superheroes — they’re just like us!), until the pair are ambushed and blasted off the road by an unidentified alien spaceship.

The clip ends with Jennifer’s car dangerously flipping and rolling down a nearby hill. But it’s not the scene’s violent conclusion that has Marvel fans talking online. Instead, it’s the alien spaceship that ambushed Bruce and Jennifer that seems to have caught the attention of MCU fans.

Indeed, there are some MCU viewers who believe that the ship seen in the recent She-Hulk clip may have come from Sakaar.

An Unresolved Conflict — In 2017’s Thor: Ragnarok, it’s revealed that the Hulk ended up living as a beloved gladiator on a trash planet known as Sakaar following the events of 2015’s Avengers: Age of Ultron. Near the end of Ragnarok’s second act, however, Bruce ends up escaping from Sakaar and, in the process, helps stoke a rebellion that leaves the planet’s tyrannical ruler, The Grandmaster (Jeff Goldblum), at the mercy of his former subjects.

During his escape from Sakaar, Bruce also steals The Grandmaster’s personal ship, which bears a striking resemblance to the one that attacks Jennifer and him in the recently released She-Hulk clip. The two ships, at the very least, share the same basic design. Given what happens in Thor: Ragnarok, it’s easy to believe that someone on Sakaar holds a grudge against Bruce, wishes to bring him back to the planet, or both.

Whatever the possible reason, there’s a real chance that the ship seen in the new She-Hulk clip is from Sakaar. If that ends up being the case, then that means certain early She-Hulk leaks — namely, the ones that say it’ll end with Bruce traveling back to Sakaar — may be more accurate than fans had previously assumed. That would, in turn, suggest that She-Hulk may set up the World War Hulk adaptation that Marvel is rumored to be secretly developing.

The Inverse Analysis — Odds are, fans will probably have to wait until She-Hulk wraps up its first season to find out the reason behind the attack that turns Jennifer Walters into the MCU’s newest green-skinned superhero. That said, Jennifer’s transformation being caused by an attack rather than just a freak accident does make it seem more likely that She-Hulk may not only tie into past MCU titles, but also set up a future Hulk-centric project.

If this She-Hulk theory is correct, that means the upcoming Disney+ series may, among other things, reveal that Bruce Banner still has some unfinished business he needs to attend to on Sakaar.