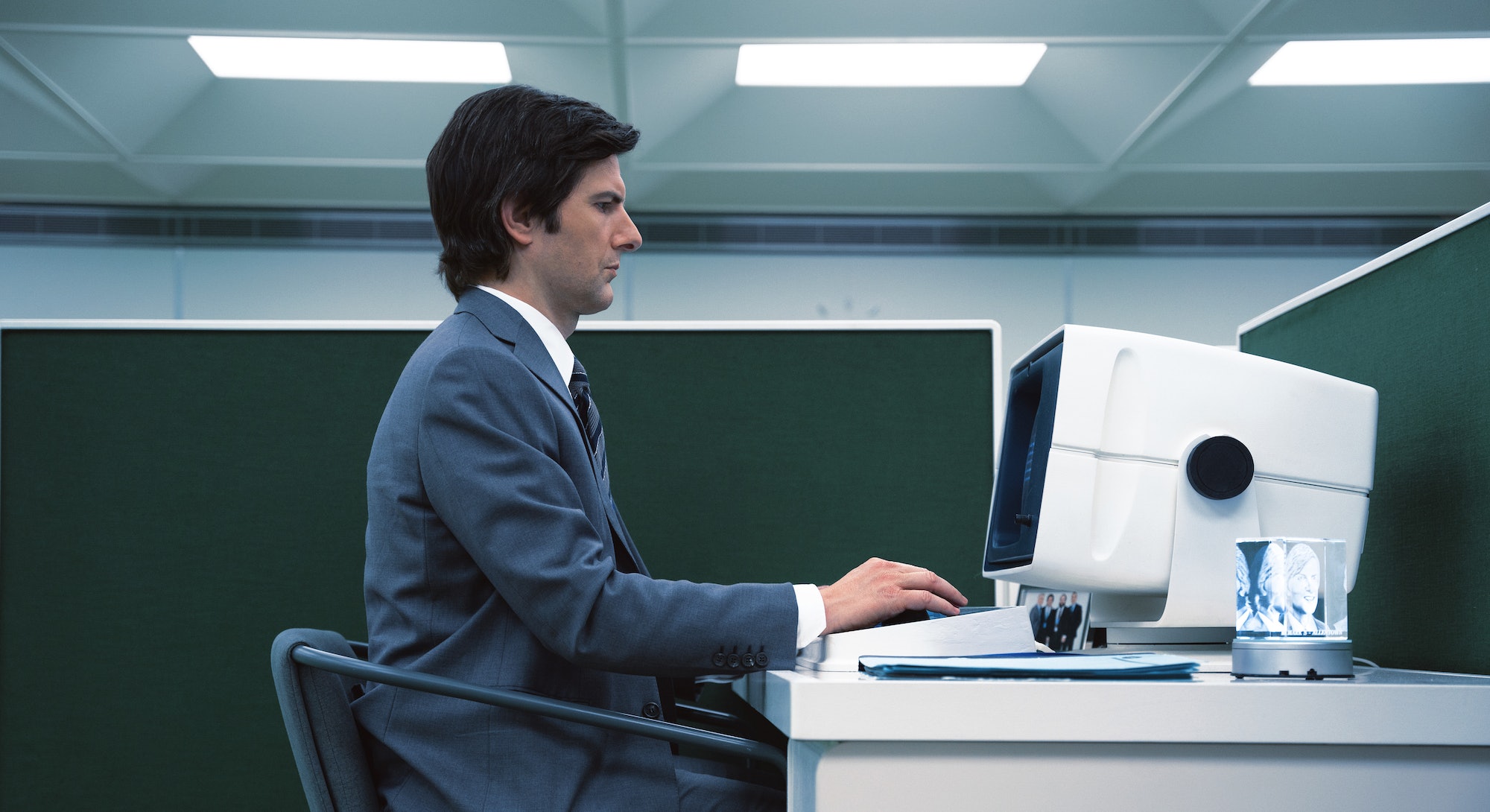 After moving to Los Angeles, Dan Erickson worked a boring desk job in “a tiny, windowless office.” One morning while on his commute, he did something that terrified him.

“I caught myself wishing I could just disassociate from the next eight hours,” Erickson tells Inverse. “It occurred to me that that’s a messed up thing to wish for. We’ve got such precious little time on this Earth, but in that moment I totally would have given up those eight hours.”

In the new Apple TV+ series Severance, Erickson’s first as creator and showrunner, his fantasy plays out like an eldritch nightmare. In this sci-fi thriller, employees at the mysterious company Lumon undergo a “severance” procedure that separates their egos. At work, they have no memory of themselves or the outside world. At home, they have no clue what they do for a living.

Audiences enter Severance through Mark (Adam Scott), an employee who comes to lead his fellow desk jockeys — including foul-mouthed Dylan (Zach Cherry) and rebel newbie Helly (Britt Lower) — on a daring mission to quit in one piece.

Erickson’s various influences speak to the show’s premise of a workplace keeping dark secrets: films like The Truman Show, Office Space, Brazil, the video game The Stanley Parable, and the Dilbert comic strips.

“Then there’s stuff like The Backrooms, which is a weird online urban legend,” he says. “There were a lot of disparate influences.”

But Severance is its own beast, which the show’s cast and creative team, including stars Adam Scott, John Turturro, Patricia Arquette, and series director Ben Stiller tell Inverse. Its genius isn’t simply that it’s a sleek mystery box thriller with a sarcastic sense of humor (though it is that too), but how it intelligently grapples with questions of freedom, consent, individuality, and how business should and shouldn’t be personal.

To challenge the basic tenets of employment, the show’s narrative favors either side of the “work-life balance” until the entire scale collapses under the crushing weight.

“It's scary when you really look at how much of our self-worth and identity are wrapped up in our jobs,” says Erickson.

The Ins and Outs of Severance

In its beginning, Severance primarily revolves around the inner crisis of Adam Scott’s character, a widower who applied for Lumon precisely to be severed. In theory, there’s no better way to forget you’re in mourning than forgetting your dead spouse completely, but Mark’s solution has side effects.

“He's lost the sense of self that comes from having a job you can actually remember and talk about,” Erickson explains. “In a world where we're taught to be so defined by our careers, he has to totally relearn how to think about himself.”

“No one should be as invested in their boss's bottom line as they are in their own life.”

“He’s stripped himself of an identity that most of us latch onto,” Adam Scott tells Inverse. “He’s just moving along through life without feeling or doing much of anything. He can disappear for eight hours and not feel all of the pain in his everyday life. As far as having any sort of identity around what he does, it’s gone now.”

In Severance, the characters come to terms as “Innies” (their ego that only knows life at Lumon) and “Outies” (their other self that goes home and lives in ignorance of their jobs). It’s dissociation on a new level. To Erickson, it’s how Lumon can exploit its workforce for its own profit.

“No one should be as invested in their boss's bottom line as they are in their own life or happiness,” Erickson says. “But there are certain things we learn as humans, like empathy and self-worth, that I think we're often discouraged from bringing to the workplace, to our own detriment. The less of ourselves we bring to work, the easier we are to exploit, or roped into immoral practices. But also we need that separation in order not to lose ourselves entirely.”

“You can’t escape yourself completely,” says John Turturro, who stars as Irving, an older coworker who follows Lumon’s rules by the book. “People always ask, ‘What do you do?’ Especially if you’re an actor. I don’t like to go to parties because people always ask [about it]. I don’t ask doctors, ‘How’s your latest surgery?’ But obviously, life is affected by what you do.”

Severance began production on the brink of the Great Resignation — an ongoing phenomenon where a dissatisfied workforce has quit en masse due to worsening systemic problems typically found in the workplace. A record 4.9 million Americans quit their jobs in November 2021 alone.

While the Covid-19 pandemic alone didn’t cause workers to quit, the threat of an airborne disease exacerbated frustrations that feel needless in the face of stagnant wages, rising costs of living, the violation of boundaries between work and home, and the looming specter of death. It’s all been enough to encourage workers of all types to rethink livelihoods. Severance’s arrival is unintentionally in sync with the national mood.

“The less of ourselves we bring to work, the easier we are to exploit”

For a time, the series’ creators, directors, and talent questioned its relevance. During a widespread pivot away from the office, Erickson was concerned that his show, scripted before 2020, was an antiquated relic of pre-Covid life. Then people began quitting their jobs, unionizing, or just pushing back against employers who have siphoned away precious time, patience, and energy. “Hating Your Job Is Cool. But Is It a Labor Movement?” reads the headline of a recent New York Times piece covering the Reddit forum r/antiwork, where people’s frustrations over jobs aren’t just vented but a future without work is imagined.

“There’s no question we made this show during a volatile time,” Erickson says. “What’s amazing [to me] is how much more relevant it became, as the lines between work and home life broke down … We started shooting the day after the 2020 election. We shot the opening scene, of Helly waking up on the table, on January 6th, with rioters inside the Capitol. There was always a pressure to tell a story that was relevant to a rapidly changing, increasingly uncertain world.”

“We shot the opening scene on January 6th, with rioters inside the Capitol.”

Comedy star Ben Stiller directs six of Severance’s nine episodes (Irish filmmaker Aoife McArdle helms the other three). Speaking to Inverse, Stiller remarks how the show’s commentary bled behind the scenes. “It is about these workers who decided to have some agency over what they’re doing and question the corporate structure. That’s a very relevant thing.”

“During the heart of the pandemic, I saw our crew and everybody’s attitudes towards work — questions of how hard and long we work, hours that take us away from families and priorities — [it] shifted,” Stiller says. “A lot of good has come out of that questioning in what we’ve seen as the status quo. How hard and long they’re supposed to work. To what end?”

“It added to the surreal nature of the whole thing,” says Scott. “I realized, eight months in [to production] that people I’ve been spending 12 hours a day with, I’d never seen the lower part of their face. It was bizarre because usually you’re so bonded by that point.”

Patricia Arquette stars as a top-level executive at Lumon, and Tramell Tillman plays her direct underling. Both tell Inverse the severance procedure surrenders control to employers.

“The idea of a totally committed workforce that isn’t distracted by anything else, how does that affect productivity?” asks Arquette. “If you could have people get to the point where they forget they need anything outside of work, obviously there would be some upside [for employers].”

“Being able to separate memories and keep focused on the task at hand is an element of control to produce productivity,” says Tillman. “This world does not create room for individuality. And I think that’s not for naught.”

While Severance demonstrates power wielded by Lumon, Erickson believes there’s even more strength in solidarity. “It's about workers reclaiming power, which is obviously a brutal, ongoing human struggle. Workers are extremely powerful, but I think solidarity is one of the biggest challenges in that, especially when those in power try to divide in the ranks,” Erickson says.

As the show reveals, Lumon has separated the departments of its employees in the hopes alienation and distrust will never inspire a coup. “It goes even further,” the creator adds, “Mark blames his Outie for putting him in that office which deflects responsibility from the company. It’s ‘divide and conquer’ taken to the extreme, which I think reflects a real dynamic that workers have to face in demanding fair treatment.”

Erickson admits he doesn’t have all the answers about the ideal work-life balance. Even he struggles to figure it out for himself.

“I just hope people know that their value can't be quantified by what they bring to their jobs,” he says. “We're all way more interesting and weird and beautiful than that.”