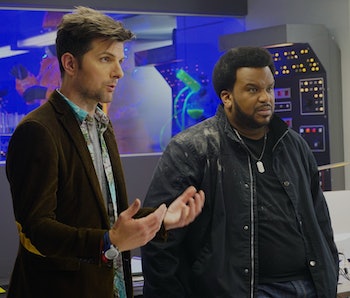 Gary Kordan has just one big rule when it comes to designing the funniest comedies on TV: He never makes anything look funny.

“I never, ever, ever put priority in anything being funny, ever,” Kordan tells Inverse while on the phone and stuck in Los Angeles traffic. “No matter what it is, I go realistic, down to the post-its, the fingerprints, the scratches on a monitor. I always operate like I’m shooting the most serious drama ever. I feel that the more realistic it looks, the funnier it is.”

A behind-the-scenes veteran of TV with two Emmy nominations to his name, Kordan’s work has been seen in shows like Workaholics, Key & Peele, and the Amazon family series Just Add Magic. Kordan’s most recent project, the pilot for the FOX horror comedy Ghosted, perfectly epitomizes his secret to making comedy look so good. “I didn’t look at [Ghosted] like I’m doing a TV show for FOX,” he says. “I looked at it like a 150 million feature.”

Of course, Kordan didn’t actually have $150 million dollars to design Ghosted. The show stars Adam Scott (Parks and Recreation) and Craig Robinson (The Office) as two unlikely heroes recruited into a top secret agency to investigate the paranormal. Still, Kordan gave the new workplace comedy-slash-horror some much-needed texture by adding “layers” of the mundane, to evoke the “tragedy of the workplace” and the “rust of the location.” Goop and slime were smeared all over the walls of a warehouse (where the two heroes find aliens for the first time), while the office of the Bureau Underground — the “workplace” of the new comedy — was painfully outdated on purpose.

“My goal was to make something like the government built it in 1960, with mid-century modern design,” Kordan explains. “But because it’s an underfunded area of the government, they haven’t done any renovations. They’re still working with computers with knobs and buttons and graphics of the early ‘70s.” The designer even managed to obtain old NASA manuals to get a sense of the time and place.

“I got my hands on NASA graphics manuals to look at how the government branded things in the late ‘70s. Everything from the coffee maker to the control board of the spaceships, I have wood grain in there, with septic tones to make it look like you’re underground.”

Kordan’s skills to create sharp, vivid sets on a manageable budget came from his time on Key & Peele the award-winning sketch comedy show that ran for four seasons on Comedy Central and “a beast of a show to do.”

“We did 86 sketches in seven weeks,” Kordan recalls, “The budget wasn’t great. We had marching orders we put upon ourselves to make [the sketches] cinematic. I feel that the more realistic it looks, the funnier it is.” From ‘80s aerobics videos to epic Pirates of the Caribbean ripoffs, Key & Peele wowed with impressive visual design while it made audiences howl. “You do the research and you don’t mess up,” says Kordan. “I have a sharp eye and the people at home have a sharp eye. Don’t use the wrong font. Don’t use the wrong couch. Work weekends and overtime to make sure you are not phoning it in because you think no one is going to notice.”

After several seasons on Key & Peele, Kordan worked on other shows before coming aboard for the Ghosted pilot, where he imbued ‘80s and ‘90s paranormal TV aesthetics. “The design came from not making the show look like anything shot in the last 20 years,” he says, explaining he studied everything from The X-Files to Ghostbusters, which “played around with unexpected color.” The one exception to the rule was Stranger Things, which he praises for “phenomenal” production design. “I’m jealous I’m not doing that show,” he admits. “There’s no way while doing research for a paranormal piece that should feel dated that you don’t look at Stranger Things and look at what the art department does on that show.”

One set for Ghosted in particular proved to be the most daunting challenge for the crew. During the interview, Kordan walked Inverse through the behind the scenes of shooting the big chase sequence seen in the pilot.

“Our biggest challenge was these scenes in a power plant,” Kordan says. “We shot that at an actual Budweiser plant in Los Angeles where they brew. No one ever shoots there. The only people that have ever shot there was J.J. Abrams for Star Trek.”

Because the brewery abided by FDA regulations, everyone on set had to wear hairnets and were forbidden from wearing deodorant and perfume. The crew worked long hours overnight, in tight spaces, in order to transform the brewery into a power plant overrun by an alien menace.

“We were on catwalks a hundred feet above these massive vats of beer, putting up graphics, putting things up on the side of the wall, and loading in that coil onto like — there wasn’t a lift elevator so we’re carrying parts of it onto the stage,” he says. “Where they monitor the brewing, we turned it into the boring office where the copy machine is. All of that had to happen in a half a day of prep so they could shoot the next morning.”

Although Kordan wishes he could have continued working on Ghosted, the reality of TV work forced him to book another show just as Ghosted was ordered to series. But Kordan hopes that the work he left behind will one day be referenced, just as he looked at Stranger Things to pull off his work. “My goal in the next few years, there’s some art department that’s pulling pictures of Ghosted, going, ‘We want it to look like this.’”