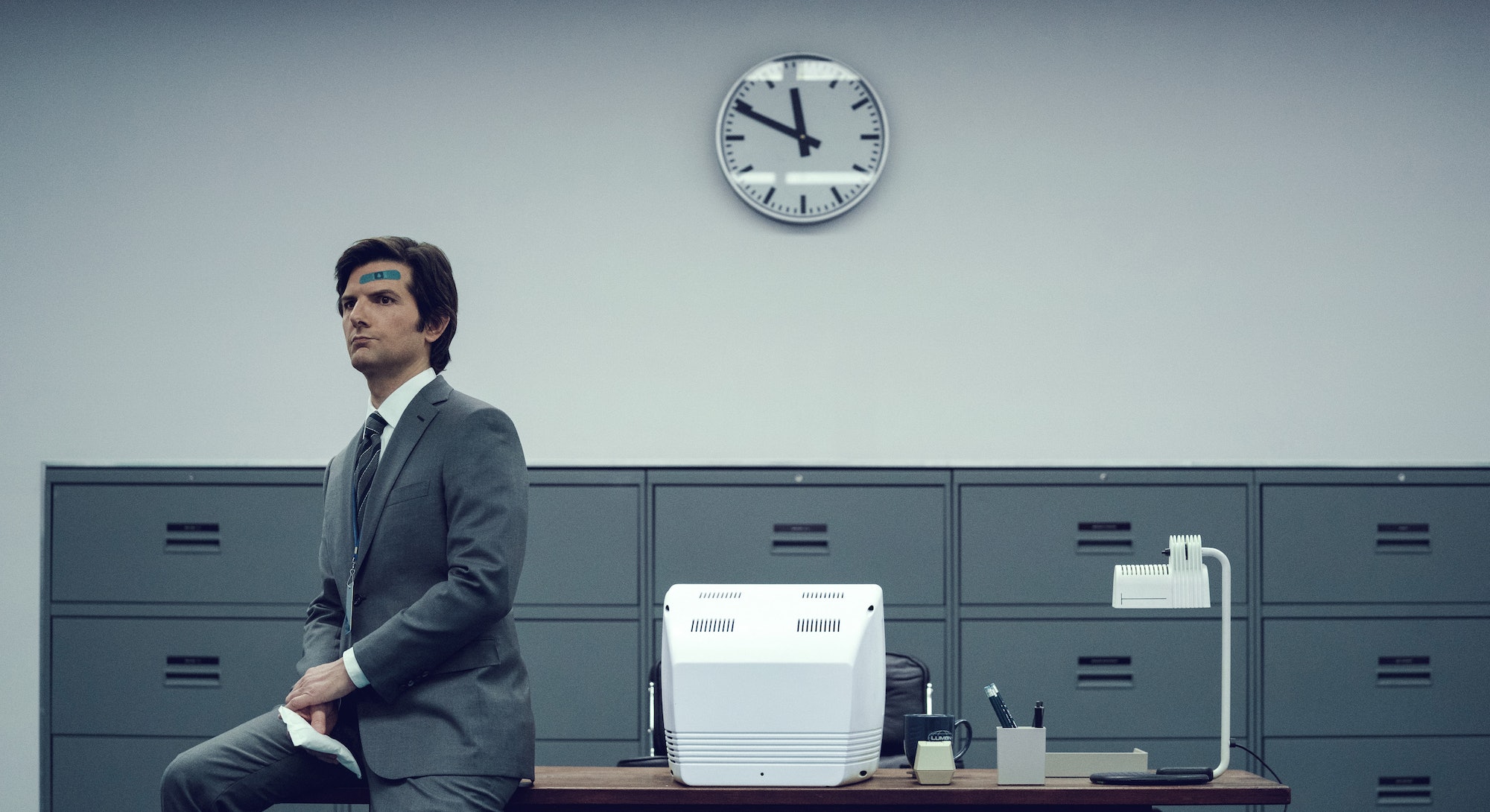 Losing oneself to work, especially as a response to grief, takes on a literal meaning in the surreal new series, Severance.

Lumon is unlike any workplace you’ve heard of. No one inside Lumon’s minimalist office has any idea of life on the outside. And on the outside, employees have no recollection of their 9-to-5 job. Through a mandatory “severance” procedure, workers clock in and out, almost as different people. Is it cruel? Or is it efficient? For protagonist Mark, played by a melancholic Adam Scott, it is a convenient way to overcome loss. Only when it stops being convenient does Severance begin to feel severe.

Set up like The Office, dressed like Mad Men, and wielding the eldritch energy of the video game Control, Severance is an enthralling must-see sci-fi that remarkably redefines the workplace drama. As a mystery, Severance is just competent enough to compel you to the next episode. But in its timely themes regarding identity, work, and self-worth, it is an obscenely rich piece that is far greater than the mere sum of its fluorescent-lit parts.

Severance is about loss and the awkward and self-destructive ways people fill a void. For Mark, the death of his wife led to his employment at Lumon, a powerful corporation known for its morally gray, politically divisive “severance” — a sensitive topic that can silence a dinner party.

For everyone else in Mark’s orbit, including co-workers Irving (John Turturro), Dylan (Zach Cherry, who is quite familiar with Inverse), and newcomer Helly (Britt Lower), their reasons are revealed in time. Other major players, like intrusive boss Peggy (Patricia Arquette) and humble Burt (an unusually warm Christopher Walken), add texture to a world where power and control are uneven.

It isn’t clear what Lumon does exactly. Even employees cook up crackpot theories about what they do. But something is certainly suspect at the heart of it, which is why the plot thickens when an ex-employee, Petey (Yul Vazquez), desperately tries to get Mark — his best friend in Lumon and total stranger outside of it — to take a deeper look.

Disappointingly, answers to the most obvious questions are still withheld by the end of the first season. Luckily, the threads Severance focuses on instead are more attractive. To the show’s credit, it wisely recognizes the ethical quagmire that “severance” proposes. No one is enslaved in any traditional sense, but the procedure effectively creates caged egos who’ll never know life outside.

What does freedom mean when it can be surrendered? What is identity when it can be denied? And can one ever truly separate from work when work is all you can have? “Do I have a family?” a new employee asks. In a chilling tone, they’re told, “You’ll never know.”

Severance emerges from Dan Erickson, whose credits include The Good Fight and the network procedural Blue Bloods. But the series takes most of its shape from comedy actor-turned-director Ben Stiller and Irish filmmaker Aoife McArdle (Brave New World). They split directing duties across the show’s freshman season.

Both Stiller and McArdle find novel ways to unnerve the viewer.

In weaponizing the show’s aesthetically clean set design — one profoundly informed by mid-century modern architecture — both Stiller and McArdle find novel ways to unnerve the viewer, perverting a mundane world into something extraordinarily spooky. The outside world, too, is cloaked in heavy shadows. (Almost too much, at times. It’s sometimes easy to think half the show was filmed during a power outage.) The show’s gorgeous and eerie titles contrast with the iconic and ironically used Helvetica typeface, a font designed to be intentionally inoffensive. The result is indeed offensive to one’s instincts. This sense of dread pervades Severance, and it never yields.

In a vacuum, Severance is a B+ mystery, with clever spoofs of the contemporary office. (Observe the laughably awful ways Lumon rewards good performance.) But its timely arrival imbues Severance the power of an A+ buzz-worthy release. The many questions Severance poses, primarily what kind of relationship an individual should have towards work, feel urgent amidst widespread labor disputes that have led to the “Great Resignation.”

Severance is pro-proletariat. It champions being suspicious of employers, and it all feels eerily timed to the moment — with nary a mention of a pandemic. Even if Severance disappoints as a plot-driven thriller with convoluted reveals, it earns its place in any and all discussions about the anxieties of the modern workplace.

The Apple TV+ series isn’t spotless despite its pristine cubicles. With annoying hesitance to reveal much of anything, each of the first season’s eight episodes runs just a tad long. Little of the show feels like it moves forward until the heart-stopping finale. But it’s what Severance gets right that allows it to be sublime. Its contrast of sterilized environments and foul atmosphere achieves the tone even Loki and Legion failed to capture.

Its big questions, however unwieldy, are enough to encourage anyone to think deeply about their relationship to work and whether it’s at all healthy to be defined by it. What’s the ideal work-life balance? To Severance, the only answer is its utter destruction.

Severance will begin streaming exclusively on Apple TV+ on February 18.