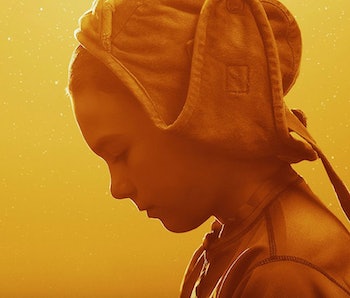 It’s not easy to make a movie set on Mars feel claustrophobic, but writer-director Wyatt Rockefeller manages to do just that in his debut science fiction feature, Settlers.

Running at just 103 minutes, Settlers takes familiar sci-fi concepts and combines them with an intense and intimate family drama. The result is a slow-burn experience — alternately an introspective sci-fi fable and a contained psychological thriller. (Think Moon meets Misery.)

Ultimately, this collision of genres works to highlight (and condemn) humanity’s eternal desire to imprison and control each other. As Settlers argues, there’s no reason to believe running away to another planet means we’ll ever be able to conquer that particular failing of human behavior.

The writer-director’s feature debut follows a struggling family on Mars who must confront another group intent on taking up residence in their sealed-off habitat.

Settlers opens on a quiet scene: A young daughter looks out her bedroom window and names all the stars she can recognize as her father and mother look on approvingly. It’s a subtle but effective moment, quickly establishing the strength of the film’s central family unit and the comfort they find in one another just a few days before their lives are thrown into disarray.

Settlers follows a struggling family on Mars who must confront another group intent on taking up residence in their sealed-off habitat, and disruption comes in the form of Jerry (Ismael Cruz Córdova), a militaristic outsider with a personal connection to the structure Ilsa (Sofia Boutella), Reza (Jonny Lee Miller), and Remmy (Brooklynn Prince) have turned into their home base.

A threat to the family’s established order, Jerry’s arrival swiftly alters power dynamics around the base, forcing this family to adapt to his presence. From there, Settlers follows the family as their relationship with Jerry continues to evolve — as does their desperation to take back control.

To say much more about the plot of Settlers would spoil some of its best surprises, as the film succeeds specifically by keeping audiences in suspense about what will happen next. Broken up into three chapters, the narrative gradually teases out why Rockefeller chose to approach the story in separately titled sections, resulting in one of the more satisfying pleasures Settlers has to offer.

Visually, Rockefeller keeps things simple. He doesn’t employ major stylistic flourishes, opting to construct the film out of steady long takes, close-ups, and the occasional handheld sequence. Settlers was shot entirely in Vioolsdrift, a remote town located in the desert region in the Northern Cape of South Africa. Cinematographer Willie Nel uses this environment to his advantage, painting the film in largely desaturated colors but exploiting the region’s bright desert light to convey the harsh, relentless heat of Mars.

If the style and mood of Settlers stems from its ambitious, segmented script and bleak visual style, the film’s heart belongs to Brooklynn Prince. This young actress, who made waves back in 2017 with her breakthrough performance in Sean Baker’s The Florida Project, shines as the film’s primary character, the planet around which its many twists and narrative detours revolve.

Prince proves her turn in The Florida Project wasn’t a fluke. Magnetic and charming, she brings the character’s anguish, fear, and determination fully to life, suggesting the experience of a far more seasoned performer. After Remmy runs away from her family’s settlement in a huff of juvenile rage, Prince gives the film its most relatable and emotionally potent moment, screaming into the sky out of helpless frustration upon reaching the impenetrable dome surrounding her family’s settlement.

Elsewhere, Córdova makes an impression as Jerry, a character who blames the world for his own questionable choices. He cuts an imposing figure in his first few scenes and remains an elusive creation for much of the film — right up until the moment that finally lays bare his limitations and failings.

Where Settlers falls short is its second act. The film’s middle section drags in a way that its opening and closing chapters do not, and that’s primarily due to Rockefeller’s inability to explore Boutella’s Ilsa as profoundly as he does Prince’s Remmy.

Boutella is established as the lead figure of Settlers’ second chapter, and the emotional journey Ilsa undergoes is the most turbulent and tragic of any character, at least on paper. Boutella does her best to convey her character’s challenging, multi-layered experience, but Rockefeller’s script doesn’t match her efforts.

Settlers still succeeds as both a thriller and a bleak coming-of-age story.

Rather than focusing solely on Ilsa, the film’s second act splits its focus between Ilsa, Remmy, and Jerry with mixed results. That miscalculation results in too many scenes throughout the film’s middle section that lack the energy, mystery, and tension present throughout its first and third chapters.

Despite those issues, Settlers still succeeds as both a thriller and a bleak coming-of-age story. Rockefeller’s narrative ambitions may slightly exceed his reach. Still, Settlers ultimately establishes the writer-director as a storyteller unafraid of making bold, narrative choices, including some that will undoubtedly alienate some viewers. At a time when Hollywood designs so many films as four-quadrant audience pleasers, that’s worth celebrating.

Settlers will be released in theaters and on VOD Friday, July 23.

More like this
Culture
17 hours ago
You need to watch the most subversive sci-fi love story on Netflix before it leaves this week
By Alex Welch
Culture
6.28.2022 9:00 AM
8 sensational sci-fi shows and movies coming to HBO Max in July 2022
By Robin Bea
Culture
6.25.2022 10:30 AM
You need to watch the most inventive Bruce Willis time-travel movie before it leaves Netflix this week
By Eric Francisco
Related Tags
Share: