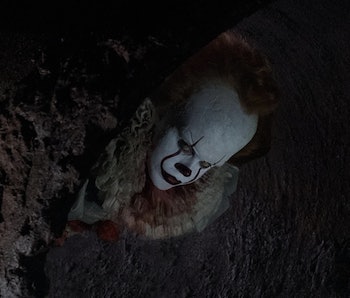 Stephen King is having a bit of a moment right now — again. Between the remake of IT and the upcoming television shows The Mist and Castle Rock, the award-winning horror writer has quickly made his way back into the entertainment industry’s psyche. There’s a reason for that, as King has created some of the most disturbing stories and villains in recent horror history.

With over 50 novels and almost 200 short stories to his name throughout a decades-long career, King is still going strong. But he’s already provided horror fans with some of the most fantastically disturbing villains and monsters out there. In honor of the 2017 King renaissance, we decided to rank King’s scariest, most dastardly villains of all time. The worst of the worst appear in multiple storylines, tying the King multiverse together in a way that implies something numbingly terrifying.

Percy Wetmore ends up being even more terrifying than the obvious villain of The Green Mile, “Wild Bill” Wharton. While Wild Bill is the obvious foil to John Coffey’s healing hands and kind nature, destroying everything he touches and acting as the quintessential bad guy, Percy is intentionally cruel for the thrill of it. He’s made all the worse by his bastardized authority — he’s the governor’s wife’s nephew — that he unabashedly uses to his advantage.

Scariest moments: blatant homophobia backed by authority; drawing out Delacroix’s execution; and killing Mr. Jingles, Delacroix’s pet mouse, just because he can (which is more rude than anything but deserves a mention).

Most disturbing quote: “[Mouseville is] just a fairytale these guys told you to keep you quiet. Just thought you should know, faggot.”

Gage Creed starts out as a regular child but is soon transformed into the demon child of your nightmares after he’s killed by a truck and his dad buries him in the darkly magical Pet Sematary. Gage comes back to life as an evil shell of himself, as things buried in the cemetery are wont to do, and goes on a killing spree for the ages.

Scariest moments: small, blond child with a scalpel; brutally killing both Jud and his mother; and attempting to kill his father.

Most disturbing quote: “Hello, Jud. You fucked with me once. Did you think I wouldn’t come back sooner or later and fuck with you?”

As the leader of the Phoners — the zombies who were infected by a cell phone virus — the Raggedy Man is more powerful than any of them, somehow gaining telepathic abilities. He chases the remaining humans down with his zombie hoards to infect them with the “Pulse” virus and has to be destroyed via bomb to be stopped. Created by way of cell phones, and definitely trying to put an end to humanity as we know it, Raggedy Man firmly has a space on this list.

Scariest moments: showing up in nightmare visions; telekinetically forcing a character to write the word “insane” in 14 languages and shoving a pen through his eye.

Most disturbing quote: Any time he labels the main group as “insane” and “not to be touched.”

When the mysterious Mist sets in during King’s aptly named novella “The Mist,” Mrs. Carmody is the religious zealot who tries to convince everyone else trapped inside the grocery store with her that the Mist is divine punishment. She drags other people into her delusions and gets a lot of them hurt, using her unique form of psychological warfare to get her way.

Scariest moments: predicting someone will die; when she kills people for disagreeing with her; and convincing her cult to kill people who go against them.

Most disturbing quote: “They’ll come for you. Maybe tonight when darkness comes, they’ll come tonight, and they’ll take someone else. See if they don’t. And when they do, you will cry to God, and you will beg Mother Carmody to show you the way.”

Kathy Bates won an Oscar for her role as Annie Wilkes in the 1991 film adaptation of King’s Misery, and for good reason. She perfectly captured Annie’s murderous “Dragon Lady” vibe. Annie is the sledgehammer and drug-wielding murderer you never knew you were afraid of until King introduced you to her.

Scariest moments: when she definitely killed the kids in her care; breaking Paul’s ankles with a sledgehammer to “hobble” him; and that time a waitress turned into Annie.

Most disturbing quote: “I am your number one fan.”

Blaine is a super-smart, artificially intelligent train dealing with severe mental illness. It’s so much. He plans to commit suicide and will only let his passengers off if they can ask him a riddle he doesn’t know the answer to, Gollum-style. He also has a bit of a split personality going on, with a more stable “Little Blaine” talking to his passengers.

Scariest moments: when a train plans to commit suicide and is willing to take a bunch of humans with him; and back in the day when he assisted his sister train in her own suicide.

Most disturbing quote: “Ask me a question.”

Yep, Pennywise. He’s probably King’s best-known villain — for a good reason. Pennywise is the clown manifestation of It, a cosmic shapeshifter and demonic entity who feeds on people’s fears and thinks kids really like clowns. He lures children into sewers with balloons, manifests as people’s worst fears, and is actually a giant, cosmic spider.

Scariest moments: terrorizing children; living in the sewers and speaking to people through pipes and bathrooms; and making balloons scary. (Who does that?)

Most disturbing quote: “You’ll float, too.”

1. Randall Flagg; The Stand, The Dark Tower Series, and More

With necromancy, prophecy, and other unspeakable powers on his side, Randall Flagg comes in as the scariest mofo in King’s arsenal. And it’s a fitting title for a character with several names who pops up throughout the Stephen King multiverse. He goes by Walter o’Dim in The Dark Tower series, usually appears as some sort of dark sorcerer or powerful entity, and is always bent on destruction.

Scariest moments: when he manipulated the fascists, the weak, and the lonely to create an evil society in The Stand; that time he raped someone with a gun; and just being himself.

Most disturbing quote: “Before I’m through with you, you’ll beg to tell me.”

More like this
Entertainment
6.21.2022 12:15 PM
Ethan Hawke is an instant iconic horror villain in The Black Phone
By Eric Francisco
Entertainment
6.19.2022 11:30 AM
You need to watch the best monster thriller of the '90s before it leaves HBO Max next week
By Mónica Marie Zorrilla
Entertainment
6.30.2022 1:58 PM
Stranger Things Season 4 Volume 2 release date and time, trailer, runtime, episode length, spoilers, theories, and more
By Jeff Spry
Share: