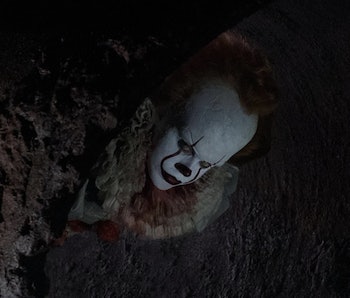 The Independent
Emily Gaudette
May 8, 2017

The MTV Movie & TV Awards dropped the second trailer for Stephen King’s It film, set to debut this fall. We don’t see much more of Pennywise than we did in the first trailer, but we do get a ton more of the Losers’ Club bickering and discussing their classmates.

That’s the crux of Stephen King’s It — that the ancient evil creature haunting the Losers into their adulthood isn’t just a child-murdering clown. It has chosen the guise of a clown out of a twisted, misguided attempt to attract and stalk children. In King’s novel, the Losers understand this phenomenon better than the adults in their lives; after a hallucination session they initiate by inhaling smoke together, the Losers communicate with the all-powerful celestial deity in King’s novels. That god tells them It has been around since the dawn of time, and that Pennywise the clown was simply the form it took in order to entice Bill’s younger brother, whose arm It tears off in a gutter.

“Suddenly he thought he understood: It meant to thrust him through some wall at the end of the universe and into some other place (what that old Turtle called the macroverse) where It really lived; where It existed as a titanic, glowing core which might be no more than the smallest mote in that Other’s mind; he would see It naked, a thing of unshaped destroying light, and there he would either be mercifully annihilated or live forever, insane and yet conscious inside It’s homicidal endless formless hungry being.”

Of course, the Losers themselves have been socially forced into a codependent friendship because of their personal traumas, and because each of them is systematically targeted by the bullies at their school in Derry. In this new trailer, we see Bill and Bev — who share a life-long attraction — discuss how hanging out makes them all, by definition, “losers.”

It doesn’t simply attack all kids at night; the creature preys on children who feel lonely or rejected by their world. Once he kills Bill’s brother Georgie (arguably too good and simple for It’s usual taste), the creature uses Georgie’s body as a way to communicate with Bill. We see that horror show play out in the first trailer, in which It uses Georgie’s dead body like a meat puppet to scream at Bill.

It’s not 100% clear in King’s text why It keeps the Pennywise disguise on for so long, but this year’s reboot film will evidently play with the circus-like imagery as much as the original TV mini-series did. The inverted balloon pyramid we see in the trailer below is effectively frightening at face value, but when you consider that the Losers are watching an ancient evil’s attempts to design a trap they might like … well, that’s even more chilling.

More like this
Entertainment
Jan. 27, 2023
Robert Eggers' Nosferatu remake will reunite him with his best collaborator
By Eric Francisco
Entertainment
Jan. 19, 2023
Scream VI trailer brings its meta-commentary to terrifying new heights
By Dais Johnston
Entertainment
Jan. 14, 2023
M3GAN's dance to the top proves that horror can be ridiculous again
By Emmett O'Regan
LEARN SOMETHING NEW EVERY DAY.
Share: